Arlington Heights, Ill.—A group of students from First Baptist Church, Arlington Heights, Illinois, recently volunteered with an organization called “Feed my Starving Children.” When the group arrived to assemble the food packages, the students were shown a short explaining what the organization does, and a worker explained the job. After that, the teens started working. Each ingredient (rice, soy, and dried chicken and vegetables) was poured into a package, which was then sealed and put in a box to be sent out. After the night’s work was over, a worker added up the food packages in the boxes. In just a couple of hours, the teens (along with other groups that were also working that night) assembled enough food packages to feed thirteen children for an entire year!

The goal of “Feed my Starving Children” is to package food and send it to hungry children all over the world. Their work is done by groups that come to help for a few hours and package the food. Since all the work is done by volunteers, and no advertising is paid for, costs are very small. 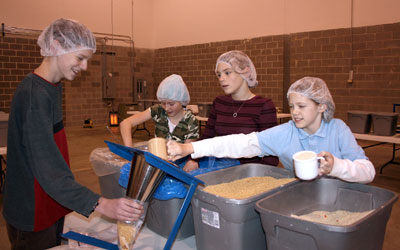 Previous post Praying for Talents For Christ and Pastor Rudy