Joy Brace earned her name early in life, having inherited her mother’s sparkling eyes and easy laugh, and having somehow channeled a good deal of her father’s personality, especially his serenity during the difficult times of life. 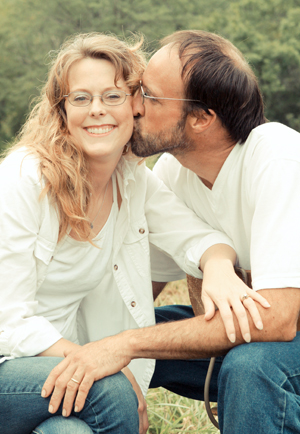 Joy Brace earned her name early in life, having inherited her mother’s sparkling eyes and easy laugh, and having somehow channeled a good deal of her father’s personality, especially his serenity during the difficult times of life. Her birth certificate reads, “Florilla Joyce Crawford,” but she was Joy from the beginning.

Joy was diagnosed with a brain tumor in August, allowing her four months with her family and friends before her death on Sunday, Dec. 4, 2011. More than a thousand people attended her funeral service, held at Faith Baptist Bible College, Ankeny, Iowa. Many testified how she spent the last months of her life spreading joy.

Students at Grandview Park Baptist School–where Joy began teaching after her marriage–had organized a fund-raising event on Thanksgiving weekend, “Embrace Joy,” featuring a preseason basketball game against Iowa Christian Academy. Joy continued to work at the school as a substitute teacher until the time of her death. Proceeds from the event were given to the Brace family. Both sides of the family were invited to a thanksgiving dinner at the church. Then at halftime, Joy sat in a chair on the edge of the basketball court, testifying of God’s goodness in her life. That weekend she had already experienced the first of several seizures, but she would not pass up a final opportunity to testify of God’s goodness in her own life.

“Heaven is coming–and it is sooooooo much better!!” she had written in a recent blog post, quoting Romans 8:18: “For I consider that the sufferings of this present time are not worthy to be compared with the glory which shall be revealed in us.”

Joy called this her “eternal perspective,” explaining to friends how her brief illness had changed the way she viewed her life. “What a fantastic thing to know that what I do today can have an eternal impact!” she wrote on Nov. 18. “People are the only ‘things’ you can take with you! Thank you to all who are praying for us, your prayers make such a difference! Please continue to pray for spiritual victory and grace for my family. I would not be honest if I didn’t say it is difficult for all of us some days. Of course, we continue to pray for healing, and above all, that God would be glorified!”

One of Joy’s last public appearances was at the Next Generation Dinner, a fund-raising event for Iowa Regular Baptist Camp held at the Marriott Hotel in Des Moines. She sang Laura Story’s “Blessings,” another testimony of God’s goodness during difficult times. (“What if trials of this life are Your mercies in disguise?”) Joy also testified of the camp’s long impact on her family’s life. The recent banquet raised funds to remodel the basement of Jensen Hall, which is where the important part of this story begins.

Back in 1970, Roger and Linda Crawford began attending a Bible study in Fairfield, Iowa. “I was a pretty rough guy,” Roger says now. “I had dropped out of high school and was working as a meat cutter at the Hy-Vee grocery. I knew how to fillet a steak, that’s about it.” Someone invited the Crawfords to spend a week at IRBC at Clear Lake, Iowa. Roger remembers his first impression: “Family camp? I didn’t know what to expect. A bunch of tents?”

Robert Ketcham was scheduled as the featured speaker, but when he fell ill, he asked his own pastor, Gordon Shipp, to cover his week of preaching. Roger and Linda Crawford sat in the basement chapel of Jensen Hall, listening to Gordon Shipp preach about full-time Christian service. They looked at each other, nodded, and walked forward at the end of the sermon. Joy was only a toddler, playing upstairs in the nursery, soon headed with her parents to the married-student housing at Faith Baptist Bible College.

In the late 1980s, Joy would follow her father and older brothers, enrolling as a Faith student in the Christian school program. By this time her father was a pastor in Harlan, Iowa, where a young man named Rod Brace dedicated his life to God’s service after one of Roger’s sermons. Joy met Rod when she was home on summer break, and the two married after her graduation in 1990.

The Iowa camp became a favorite spot for the extended family. “I can’t think of anything that has contributed more to my children’s spiritual growth,” Roger says. Today Roger is pastor of Calvary Baptist Church in Union, Iowa; his son Mike is a GARBC-endorsed chaplain with the Iowa Army National Guard; and his younger son, Duke, is pastor of Emmanuel Baptist Church, Toledo, Ohio. 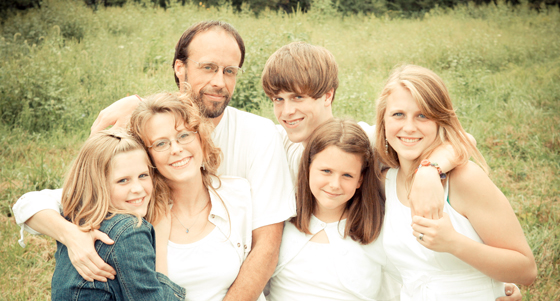 “Joy didn’t just endure suffering; she embraced it,” her brother Duke said at the memorial service. “And in embracing it she remained joyful to the end.”

Kevin Mungons is managing editor of the Baptist Bulletin. Leah Fry is the owner of Sentimental Soul Photography.

If the role of big brothers is to help their little sisters grow through adversity, then I performed my role with distinction. I am sure I took way too much pleasure in teasing little Jo Jo when we were kids. I blame her mostly for this. She was always so dramatic; it made teasing her so rewarding. Often I would give her a dare with the enticement, “If you do it, I’ll give you a dollar.” Rarely could she resist the Almighty Buck! Once I hired her to do half my paper route for a dime a day. Everything worked great until Mom found out about the deal and Joy got a substantial raise.

After I left for college, Joy was having a difficult time with some of the kids at school who were giving her grief for being a Christian. And her brother wasn’t there to stand up for her. I wrote her a letter containing this verse: “But rejoice insofar as you share Christ’s sufferings, that you may also rejoice and be glad when his glory is revealed” (1 Peter 4:13, ESV).

Now, as I look back at her life, I can see how she was called to live this out over and over. Joy saw the whole ordeal that she and Rod experienced with baby Andrew as an opportunity to bring glory to the Lord. She suffered knowing and trusting God would do something good for someone through it. Surely someone would learn of Christ; someone would find greater meaning and purpose in life through Jesus; someone would be compelled to seek the God Who held them and loved them through the darkest hours of their lives. God was working; He was moving; He was doing something good!

This was her same attitude, only more so, since the discovery of her brain tumor. God was too good and wise to waste this. When I saw her in the hospital in early September, she said, “I’m okay with this, Duke. Really, I’m okay.” Can’t you hear her saying, “God is so good; we have so much to thank Him for”?

Joy was not saying that tumors and death are good, but that God uses them for good. She would say as Joseph said to his brothers, “What you did you meant for evil, but God meant it for good, to save many people.”

Joy didn’t just endure suffering; she embraced it. And in embracing it, she remained joyful to the end. Through her suffering she testified to unbelievers of the hope of eternal life through Christ, and to believers she testified of God’s sustaining, life-satisfying grace, which is sufficient for all of life.

Why didn’t God answer Joy’s prayers regarding the tumor?

Maybe He did. What if her prayers were for God to bring great credit to Himself through her experience? What if in her weakness she asked to find a new strength that would leave an indelible mark on all who saw her peace and confidence in God’s goodness regardless of the outcome? What if her honest heartfelt cry were, “Thy will be done”? I believe God heard and answered her prayers once again. And again I am humbled and made grateful for her.

The Scripture that I’ve gone back to frequently the past few weeks has been 1 Peter 1:8 and 9. These words mean so much to me, knowing that for Joy they have been fulfilled: “Though you have not seen him, you love him; and even though you do not see him now, you believe in him and are filled with an inexpressible and glorious joy, for you are receiving the goal of your faith, the salvation of your souls” (NIV).

I’ve had two previous occasions to say good-bye to Joy for long periods of time. I’m seeing this separation as another deployment–only it’s all of us who are deployed and she is Home awaiting our arrival. Someday, like Joy, our mission will be completed and we will go Home. Her presence there makes that Homecoming all the more glorious and all the more sweet.

These last few weeks, I’ve found myself repeatedly reflecting not on the tragedy of her tumor, illness, or death, but on the tremendous blessing of her life. For 43 years God enriched our lives with a beautiful, thoughtful, kind, and committed woman who followed her Lord and encouraged each of us to do the same. Several have commented, “She lived up to her name!” How very true! We will miss her, but we thank God for the wonderful privilege of knowing and loving her.

The ‘Why Factor’ Answers Kids’ Questions about the Bible

We believe in the power of the Word of God in the hands of the Holy Spirit for building faith in the hearts of children. ...more

The population of Rugari in eastern Congo was threatened Jan. 26, making life more difficult for ...more