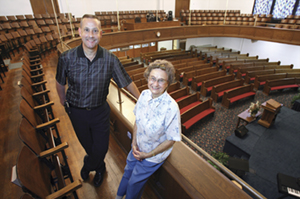 “Building projects are hard on pastors,” Jim Murphy says, as he talks with us in the balcony of First Baptist Church, Johnson City, N.Y.

Verna Hollenbeck, a long-time member of the church, nods while listening. “You’ve had double-triple duty,” she adds.

“We contemplated staying here for a long time,” says Jim of the process the church took when considering their move to a new location two miles away. “But the electric bills, the roof, the infrastructure. . . .” His voice trails off as he thinks about the impossible expenses of staying in a historic building that helped define the beginning of the GARBC.

The local hospital, United Health Services, sits adjacent to the back parking lot of the church. Off and on for 25 years, hospital representatives had made casual inquiries to church leaders, asking if the church was interested in selling. The congregation had voted in 1984 to purchase property on Reynolds Road just north of a regional mall. Then plans stalled, temporarily.

When Pastor Murphy arrived in 2002, he challenged the church to follow through with their plans. They responded with a “Come and Fill This Place” campaign to raise 1.1 million dollars over three years. A surprising thing happened as the church began to give: The local hospital negotiated in earnest, and in the space of a few short weeks, increased its offer for the property by nearly 50 percent. The local newspaper reported that the congregation formally approved the sale for 1.95 million dollars.

The fund-raising was accompanied by aggressive cost-cutting; Pastor Murphy led the church to rein in expenses during the transition years.

Jim sees the issue in larger terms. “When I was a kid, we played with empty oatmeal boxes,” he says. “Today kids have the boob tube, the Internet, too many distractions. As a result, I’m concerned that our young people aren’t being called into the ministry.”

Now in his 40s, with his graying hair in a flat-top crew cut, Jim says, “I’m not a church growth kind of pastor, I’m a throwback.”

Jim grew up in nearby Binghamton, was raised in a Catholic background, and saved in a Methodist church. “My cousins grew up in this church and brought me to youth group,” says Jim, telling how Jim Vogel (now the associate national representative for the GARBC) was his youth pastor. Jim Murphy later graduated from Practical Bible Training School (renamed Davis College) here in Johnson City, and later earned an MA in counseling from Liberty Baptist Seminary.

“First Baptist is defined by absolute authority to the Word. Preaching, Teaching, Evangelism, Discipleship, and Counseling,” says Jim, sounding like a throwback.

“He’s a good pastor,” says Verna, noting that more than 600 people attend on any given Sunday. Most of these have attended for fewer than 10 years—an interesting statistic for a 118-year-old church.

Verna Hollenbeck continues to tell the building’s story as she takes us on a tour. One could argue that this history is also our association’s history. First Baptist built a simple wood frame church on this site in 1891, then razed it to make room for the new auditorium in 1923. By that time the church had aligned with the Northern Baptist Convention and, like many churches now in our fellowship, stayed long enough to grow weary of the Convention’s growing apostasy.

Baptist Bible Seminary was founded here in 1932, hosted by the church until the seminary moved to Clarks Summit in 1968. When Harold Commons was pastor here in the 1930s, he was simultaneously president of the seminary and president of the Association of Baptists for the Orient (the mission board that would become the Association of Baptists for World Evangelism).

So we walk with Verna past a pulpit that hosted the great preachers of a movement built on preaching. We walk down a center aisle traveled by hundreds of seminary graduates, hundreds of brides, hundreds of caskets. We walk past offices once occupied by Harold Commons, Earle Griffith, Paul Jackson, offices where Emery Bancroft wrote Elemental Theology and Christian Theology.

But Verna Hollenbeck, a 1959 graduate of the seminary, is surprisingly unsentimental as she shows us through the building.

“I’m all for it,” Verna says of the move. “In order for a church to grow, you need space. There’s no room for us to grow here.”

The corner of Main and Baldwin Streets, always a working-class neighborhood, has slipped past its 1930s and ’40s heyday. Several houses that once served as seminary dorms have been torn down. The original BBS classroom building still stands, a block away, but it has been subdivided into cheap apartments that have seen better days. The hospital is now the most viable industry in a declining neighborhood.

Pastors and retired Christian workers sometimes return to visit the old campus in its twilight years. “Former students will come in and walk around the building, just to see it again,” says Joyce King, director of women’s ministries at the church. “Many seminary couples got engaged in the flower gardens across the street, and like to return to the site.”

The large Colonial Revival house across the street from the church was formerly owned by Charles F. Johnson Jr., president of the Endicott-Johnson shoe factory that drove the city’s economy during the boom years. But recently a local bank bought the landmark Johnson house, and the flower garden that hosted so many engagement walks was plowed into a parking lot.

Truth be told, that’s what will happen to this church building in a few years. Everyone understands the hospital wants more parking, and the historic church building will be quickly razed when the sale is complete.

Surprisingly, Pastor Murphy seems a bit more nostalgic about this than Verna Hollenbeck.

“It will be a sad day when this building goes down,” he says.

Kevin Mungons is managing editor of the Baptist Bulletin. Darrell Goemaat is director of photography. Read news about the ongoing construction project and download Jim Murphy’s sermons at www.fbjc.org.