YARMOUTH, Iowa---Dr. Daniel A. McClure, a member of First Baptist Church, was appointed the national chaplain for the American Legion during its 95th National Convention. 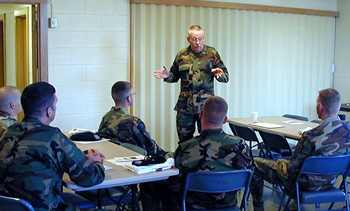 YARMOUTH, Iowa—Dr. Daniel A. McClure, a member of First Baptist Church, was appointed national chaplain for the American Legion during its 95th National Convention on Aug. 29 in Houston. For the next year he will be caring for the spiritual and ethical needs of the 2.4 million member veterans organization.

McClure is the first Regular Baptist chaplain to hold this position in the history of the American Legion and the GARBC, notes Chaplain John Murdoch, director of Regular Baptist Chaplaincy Ministries.

McClure served in active duty with the U.S. Air Force and Army Reserve and received two
Purple Hearts for combat injuries in Vietnam. He later became a chaplain endorsed by Regular Baptist Chaplaincy Ministries. He was ordained June 17, 1979, by Heritage Baptist Church, Lakeland, Fla., and was a pastor in Montana, Florida, and Iowa before retiring in 1999. His duties as chaplain, however, continued.

He was last stationed at Fort Riley, Kansas, the home of General George Custer in the 1800s. Chaplain Murdoch visited in 2003. “As I visited our chaplains stationed there, I was impressed with the history and grandeur of the fort, as well as the awesome opportunity for ministry,” he says. At that time, McClure was primarily ministering to soldiers returning from Iraq. His main responsibility was “to see each returning soldier face-to-face and then to brief each one regarding suicide, domestic violence, reunion, stress, and combat stress.”

Just between May and November 2003, McClure ministered to over four thousand soldiers, two hundred who came to him for counseling.

For the past three years McClure has served with the American Legion of Iowa as department chaplain and “will continue as long as they want me,” he says. Now as national chaplain, he will oversee memorial services at national conventions, open and close national meetings with prayer, and give guidance and leadership to the religious-emphasis program of the Americanism Commission, for which he will give direct input and offer development plans. One of those plans involves the preamble of the American Legion. It states, “For God and country we associate ourselves.” He would “like to equalize God and country in my year of ministry.”

McClure has chosen the theme “service” as the main plank of his chaplaincy. Though he retired with 43 years of military service, he says, “We never quit serving; service never stops! You serve till you die. Service is what I am, not what I was. I retired from the military, I am a veteran, but service doesn’t stop. You continue to serve in your church, family, and community.”