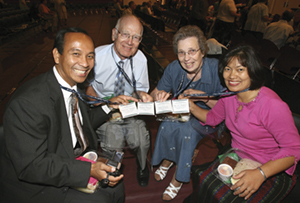 The last time we tried this, Eisenhower was president. In 1954, when the GARBC Conference was held in Chicago, we all met together at the historic Moody Church. Hard to believe, but that was the last time we held the conference in a church building.

Until now. Through the generosity of First Baptist Church, Elyria, Ohio, guests at the 2009 conference will enjoy their beautiful church facilities on June 22–26.

Brad Quick, pastor of First Baptist Church, says he thinks it is a healthy thing for the GARBC to hold the conference at a church. “I think meeting at a church will give you the kind of warmth and closeness that we can’t get in a conference center,” Pastor Quick says, but he also noted the difficulty of hosting the event.

“Some of this will be a challenge,” Pastor Quick says. “We are a church, so we do not have all of the facilities of a conference center.” But he adds that the church has space for workshops, a gymnasium, and room outside for youth activities and a Wednesday night barbe-que for conference guests.

Pastor Quick notes the minimal cost as a clear benefit to the GARBC in a year when careful finances are important. “We will have great help from our church volunteers, which means we don’t have to pay anyone by the hour to set up tables or move equipment.”

The 2009 conference is a day longer, beginning on Monday instead of Tuesday, allowing for an in-depth exploration of the conference theme. “In previous years we have had seven or eight speakers who address a wide variety of topics,” Quick says. “This year, we are very happy to have two speakers, Kevin Bauder and Rennie Showers, who will be addressing the future of dispensational theology, organized around our theme of Cutting Straight.”

And then Pastor Quick notes one more reason to visit First Baptist in Elyria. “Everyone can enjoy a free tour of my office to see all of the University of Michigan memorabilia,” says Pastor Quick.

Through the generous support of Regular Baptist Press and the Charles Ryrie Foundation, we are giving books to the first 250 pastors who register for the conference. These will be distributed during a workshop led by Jim Vogel, assistant national representative of the GARBC.

On Tuesday afternoon we’ll feature a panel discussion with Kevin Bauder, Renald Showers, and Mike Stallard discussing issues of dispensational theology. Moderated by Bernie Augsburger, the panel will take questions from the audience on the practical implications of our beliefs. Live blogging during the discussion will be moderated by John Hartog III.

Conference speakers will also host round table discussions where conference guests can interact and discuss the conference theme in depth.

Before going to Central Seminary, Dr. Bauder was engaged in pastoral ministry and church planting. His prior teaching experience includes a professorship in ecclesiastical history at Denver Baptist Bible College, where he also served as dean of men.

A 1979 graduate of Faith Baptist Bible College, Bauder earned an MDiv and ThM from Denver Baptist Theological Seminary, a DMin from Trinity Evangelical Divinity School, and a PhD from Dallas Theological Seminary. He was the pastor of GARBC churches in Colorado and Iowa, a professor and dean of men at Denver Baptist Bible College, and was a church planter in Sachse, Texas.

Dr. Bauder contributed essays to Pilgrims on the Sawdust Trail: Evangelical Ecumenism and the Quest for Christian Identity and Missions in a New Millennium: Change and Challenges in World Missions. He was coeditor of One Bible Only? and author of Evaluating the Da Vinci Phenomenon. His 2005 address to the American Association of Christian Colleges and Seminaries, “A Fundamentalism Worth Saving,” has been credited with igniting a new defense of the ideals of fundamentalism.

Since February 2005 he has written In the Nick of Time, a weekly electronic newsletter addressing current issues within Christianity. He is a chaplain with the Civil Air Patrol, the auxiliary of the United States Air Force. Dr. Bauder’s academic interests include ecclesiological issues, Baptist distinctives, and the development of American evangelicalism and fundamentalism. He and his wife, Debbie, have two children.

Renald E. Showers is a popular speaker at college campuses, GARBC churches, and Bible conference audiences coast to coast. He represents the church ministries division of The Friends of Israel Gospel Ministry.

A recognized scholar of modern dispensational theology, Rennie Showers is the author of There Really Is a Difference, a well-regarded study of the major differences between Covenant and Dispensational Theology and the various millennial views.