TOGO, West Africa---Ivan Moore has modified a Singer sewing machine and it is allowing African villagers to produce their own income, and it is providing many opportunities to share the gospel. 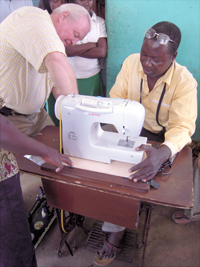 TOGO, West Africa—At first glance, it’s an odd contraption. A modern Singer sewing machine has been modified for an old-fashioned treadle, the sort of human power that has not been used in the U.S. for many years.

But in Africa, Ivan Moore’s invention is allowing African villagers to produce their own income, and providing many opportunities to share the gospel.

Last November a group of U.S. missionaries and business leaders visited the Mango region of Togo, West Africa, studying how to help the Togolese develop self-sustaining cottage industries. The Association of Baptists for World Evangelism is building the Wendell Kempton Memorial Hospital in Mango, a region where people spend half of their income on health care. ABWE’s Don Trott led the exploratory trip, along with his brother-in-law Ivan Moore, owner of Custom Products Manufacturing in Story City, Iowa, and a member of Campus Baptist Church, Ames, Iowa. Randy and Julie Redmer, graduates of Faith Baptist Bible College, also participated. The group was met in Togo by ABWE missionary Randy Young.

In Mango, the group talked with a believer who has started an orphanage for girls, teaching them to read and write, but also teaching them how to measure and to sew on treadle-type sewing machines. Part of their course involves Bible classes; the graduates are given their own sewing machines to take back to their villages, where the graduates start their own businesses. This is the sort of ministry the American group hopes to encourage in Togo.

The mission team also met with the political and economic officer at the U.S. Embassy in Lome, discussing their plans and receiving assurance that the government would do what they could to assist. The embassy official is studying what type of help is available along with potential legal difficulties.

From there they visited Togo’s minister of urbanism, who owns a home in Mango and has a special interest in its economic development. The government official gave practical suggestions that considered the cultural climate of Togo.

While in Mango, the group spent two days talking to business owners and local missionaries. Then in January, Ivan Moore returned with several ideas.

“We learned there are a number of areas that we can investigate,” Ivan says. “We could increase the sewing capability of the school by designing and building stitching and serger sewing machines that would work with the treadle-type machine base.”

The pilot project was successful enough that Ivan hopes to attract the attention of U.S. sewing machine manufacturers who are willing to retrofit current production models for African relief efforts. Those who are interested in helping with the project should contact Don Trott of ABWE.

“I get over there and then go crazy with ideas for them to have cottage industries,” says Ivan.

Because the African schools use chalk and chalkboards, and because the chalk is currently imported, Ivan is developing a mold for Africans to make their own chalk, and sell it.

“I also made a loom from a piece of cardboard and showed them how to use it,” Ivan says, adding that the missionaries are hoping to use this for handicapped people who could do the weaving in their homes. 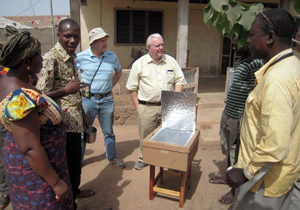 Ivan Moore and the solar oven

“I took a solar oven made out of two cardboard boxes and an aluminum foil lining. I set it up in the yard of the sewing school and put a pan of water in it. In about 45 minutes the water was boiling.” After showing the Africans his first model, they discussed how to build a larger one for cooking. “They are going to put the rice in right after breakfast and are anticipating it being done by lunch. They will then put another bowl of rice in after lunch to be ready for dinner,” Ivan said. Best of all, no charcoal is needed, saving money and natural resources. But these efforts are designed to save more than resources.

“Working with the people one-on-one is also the only consistent way to win them to the Lord,” Ivan Moore says.