Couple Partners with BBC–USA for 60 Years

SCHAUMBURG, ILL.—For 60 years Harold Bigelow and his late wife, Thelma, participated in Baptist Builders Club, both as givers and receivers. 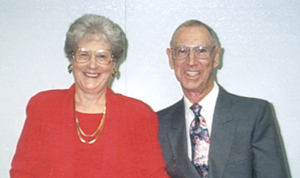 In the late 1940s the Bigelows were among the founders of Calvary Baptist in Fairhaven, N.Y. In 1950, when it became necessary, they asked for help from BBC–USA. One thousand dollars was granted to aid the church with its expansion. Harold recalls that the gift was a blessing to a new and struggling church.

In 1993 the Bigelows were members of Cornerstone Baptist in Lakeland, Fla. That church received a $10,000 grant for its building project.

Harold and Thelma personally experienced how God can use others’ finances and prayers to assist and encourage a church. Five times a year, BBC–USA sends out call letters, updating BBC–USA members and calling for prayer and gifts. Harold says, “I have tried to be part of each call as it comes. Even though my gift might be small, I know it helps.”