Preaching has always been central to the ministry of North Baptist Church in Rochester, N.Y. At one time, they even had a concrete pulpit—poured right into the front of the platform when the church was built in 1962.

“This pulpit will never be moved,” was the way their pastor put it at the time.

David Whiting, the current pastor of North Baptist, gives an affectionate laugh when telling us that bit of church lore. He’s sitting inside a rowboat (yes, a rowboat) that has been placed roughly where the pulpit used to sit. Directly overhead is a large banner telling of the church’s purpose: “Magnify God by making and developing increasingly devoted followers of Christ.”

Pastor Whiting often uses props and creative staging to illustrate his sermon texts. For the rowboat sermon, he wanted to illustrate how a good church member can support the mission of the church.

“You have two options,” Pastor Whiting says. “You can help us row, or you can get out of the boat. There are other very good boats (churches) in our city that may do church in a way that you like better. That’s okay. You can get in their boat. We would send you there with our blessing. You can help row the boat or get out of the boat, but you cannot rock the boat. That is not an option!”

Pastor Whiting has deep roots in the GARBC. He grew up at Grandview Park Baptist Church in Des Moines, Iowa, where his father owned a chain of music stores. His brother, Greg, is pastor of Grace Baptist in Westlake, Ohio—both graduated from Baptist Bible College and Seminary. Pastor Whiting is a true believer in the ideals of our association. “We are unapologetic about being a church that is holding firmly to the Bible and a conservative theology,” David says.

But he describes his preaching style as “an intentional rejection of many things I was taught in seminary. Those alliterated propositional statements are not communicating to a postmodern generation.”

Dave Baxter, a church member who was saved under this preaching ministry, tells a bit about how he came to know Christ. “Growing up, we went to church, but it was never discussed at home—we didn’t live it out. As an adult, I went to church twice a year, Christmas and Easter, but I never got much traction with that,” Dave says.

“My wife, a believer, invited me to go to church with her on Easter Sunday, 2006,” Dave said. “That morning, David had a lesson with live goats, which really drew my attention. David seemed so approachable and real, because he was so authentic. I thought, I don’t know what that was all about, but I’ll be here next Sunday.”

Pastor Whiting asks, “How long ago was that, Dave?”

This question has obviously come up before. “I love it that the gospel has so taken root in David’s heart that he knows the exact number of days he has been saved,” Pastor Whiting says, and then he speaks the nagging question that really motivates his preaching: “Is there a way a church can be totally committed to the Bible yet radically devoted to the Great Commission? And be equally devoted to being culturally relevant—to do what it takes to help people see the beauty of the gospel?”

“As a young preacher I would try to find and listen to the best communicators—and tried to learn from them—even if I didn’t think they did a good job of handling Scripture. I love my education, but what changed me was hearing Bill Hybels preach.” Pastor Whiting pauses for a bit of a disclaimer: “There’s a million things his church does that we can’t or shouldn’t do, but they do think carefully about reaching people.”

Despite the modern props, Pastor Whiting is still devoted to expository preaching. (“We’re starting a 16-week series on the divided Kingdom in 1 Kings and Chronicles,” Whiting says.) And I’m also surprised to learn he usually reads his sermons from a carefully written formal manuscript.

“This Sunday I’ll preach from a 13-page document,” Pastor Whiting says, explaining that he writes out his entire sermon because “I’m not great with words.”

Dave Baxter cheerfully interrupts: “No, he’s all about words.”

Pastor Whiting explains the seeming contradiction by saying, “I suppose I do try to craft my phrases intentionally. God has given me a real ability to put ideas into concrete words.”

As Pastor Whiting says “concrete words,” my eyes wander over to the spot where someone chipped out the pulpit, many years before Pastor Whiting arrived. The concrete pulpit may be gone now, but the message is the same.

“It’s because I love seeing lost people come to Christ! I try to avoid traditional Christian jargon. When I prepare my preaching manuscript, my target is the Dave Baxters of the world—someone who trusted Christ on Thursday night. What I say, the way I explain the text, better connect with them. If something is going to be offensive, I want it to be the gospel, not the way I said something. It’s God’s Word that changes lives.”

North Baptist Church has been growing; in fact, the church plans to build a new auditorium next to the old one. “We talked a lot about moving to a suburb,” Pastor Whiting told a news reporter from WROC-TV at the ground-breaking. “But we long to stay inside of the city because this is a city that needs hope, and we have a hope-filled message of Jesus Christ that people can find here.”

The building project seems ironic, since Rochester is by no means a growing community. Dave Baxter works as a Realtor and loan officer and sees the effects of a soft economy every day. “Real estate is all about supply and demand,” Dave says. “Right now it is hard. The city of Rochester is a little low on hope.”

“But David is intentional on bringing us hope.”

We call him Big Mike,” says Pastor David Whiting. “Mike had asked Scott Bixby (associate pastor) to baptize him, and I just helped because he’s so big!”

Before he stepped into the lake, Mike gave his testimony to the congregation: “One day after work in 2002, Mark and I sat in his front yard and I told God that I was a sinner and needed Jesus Christ as my Savior and my Lord. I committed right there to give my life to Him.” 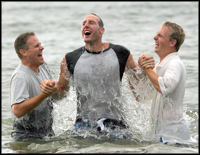 North Baptist Church started holding outdoor baptisms in 2006. With Lake Ontario only five miles from the church, it seemed natural for them to organize a lakeside baptism. Two of the first people baptized that year, Dave and Jean Baxter, now organize the baptism services.

Yes, it was a church service where 350 people wore shorts and T-shirts (including the pastor). But like Pastor Whiting’s “new” ideas on preaching, the service was motivated by a very old idea: Baptism by immersion is a public testimony of salvation and membership in a local church. In keeping with this motivation, the church posted a video on YouTube, featuring testimonies by the baptismal candidates. [Photo by John Sklenar.]

Severe flooding in the Midland area last week caused significant damage to nearly 30 of the church family’s homes, with some homes declared a total ...more

Kids Given Opportunity to Bless Orphans This Summer