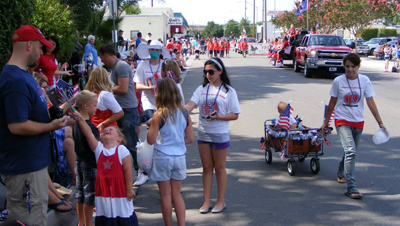 TRACY, Calif.—With Vacation Bible School only weeks away, Crossroads Baptist Church hit the streets to publicize their upcoming VBS. “We are looking forward to sharing the gospel with the children of Tracy. In order to get the word out, we participate in the Tracy Fourth of July Parade, handing out 1,700 frozen Otter Pops and VBS postcards along the parade route,” says Susan Shimp Heinrich, wife of Church Planter Timothy Heinrich. Crossroads Baptist will hold its VBS July 22–26 using RBP’s Investigation Destination: Following Clues to the King of Kings.

Temperatures on the 4th rose to 104, and the Crossroads people were near the end of the parade route. “The Otter Pops were very well received,” says Susan, “and people seemed very interested in the VBS postcards after receiving a figurative ‘cup of cold water’ on such a hot day.”

This was not Crossroads’ first time attending the parade and passing out information about their VBS. But it was the first time for Michael Kapetanic, who joined the church at the end of June. He photographed the parade and later commented that he had “never seen a church so well received in a community event” as Crossroads was that day. Several people along the parade route mentioned they look for the Crossroads group every year, as this was the church’s fifth year to canvass parade goers.

Crossroads members are still hitting the streets for follow-up. So far they have canvassed six neighborhoods near the parade route and left postcards on doors. Canvassers were encouraged after speaking to a woman and her son who told them Susan was the third person from Crossroads to invite them to Vacation Bible School. “I’m already planning to preregister online,” she told them. She even asked for more postcards to give out at the preschool where she works.