MESA, Ariz.—On the Sunday before the state of Arizona’s 100th birthday, Calvary Baptist Church marked the milestone with a Centennial Sunday. 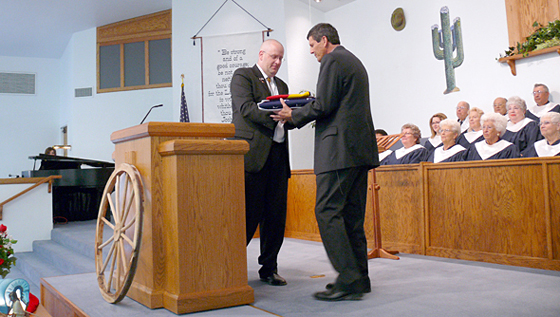 MESA, Ariz.—On the Sunday before the state of Arizona’s 100th birthday, Calvary Baptist Church marked the milestone with a Centennial Sunday.

Western-theme decorations brought attention to the day’s event as guests arrived at the church. Members were even encouraged to wear Western clothing. Gathering in the sanctuary for the morning worship service, the congregation paid special tribute to Kenneth Ramsey. He is one of the last remaining survivors of the attack on Pearl Harbor, where the USS Arizona was sunk. Edward Elnicky, Sunday School superintendent, presented to him an Arizona Centennial coin, saying he represents members of the armed services who have given their lives for Americans’ freedom.

Michael Tallent, assistant Sunday School superintendent, presented new United States and Arizona flags to Pastor Roger Williams Jr. After Pastor Williams’ message on “Looking at Life from God’s Perspective,” the congregation moved outside for a flag raising ceremony to display the new flags and recited the Pledge of Allegiance. A Centennial Dinner and fellowship ended the event.

Pastor Williams says the centennial celebration “was a once-in-a-lifetime experience for the people of Calvary Baptist Church.”