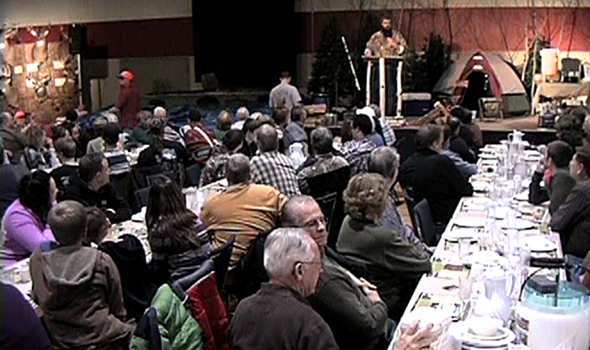 WISCONSIN RAPIDS, Wis.—An Outdoor Adventures Banquet resulted in a Wisconsin man celebrating a key spiritual event. One Sunday he took a cake to an Adult Bible Fellowship at Calvary Baptist Church. On it was written, “I took a leap of faith,” and below that, “I accepted Christ!”

Jack Austin, pastor of church education, says the man placed his faith in Christ “through the follow-up efforts of a couple of our men” after the church’s Outdoor Adventures Banquet.

Having visited the ABF once before, he wanted the group to know what Christ had done for him. He also explained that when he was ordering the cake, he told the clerk the first phrase, but then realized he wanted to be clearer. “So I told her to add the second phrase,” he says. The clerk “shot a look” at him, but he knew it was the right thing to add.

After making his announcement to the ABF, he went to Calvary Baptist’s Newcomers class, led by Pastor Jon Jenks, and shared his salvation story with them too.

To help and encourage those who had guests come to the banquet, the church offered “a little training/coaching as to how to take another step in the follow-up efforts.” Paul Walerczak of Without Excuse Ministries shared the gospel at the event.

Capitalizing on the banquet’s evangelism impact, the church hosted an Outdoor Adventures Breakfast on March 16. One of the committee members who planned the event says, “This is so much bigger than an event, isn’t it?” And Pastor Austin agrees, saying, “It is the process of making disciples.” Already 30–45 people want to be involved in the follow-up.

Pastor Austin adds, “The Lord used our evangelism teams as two other people prayed to receive Christ as well! Although not connected to the OAB event and follow-up, we’re excited to welcome them to the family of God too.”