Church Celebrates Half Century of Ministry 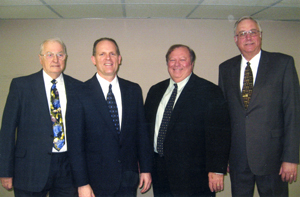 Eight pastors have shepherded the church in its half a century of existence. Four of those pastors were present for the anniversary and reflected on their ministries: founding pastor Cliff Boessel (1960s), George Heyboer (1970s), Mike Wilhite (1980s and ’90s), and Rich Stoll, who currently serves as pastor. Guests also heard testimonies from Wyzetta Titus, wife of the late Gerald Titus, who ministered as the church’s fifth pastor, and from David and Lois Gardner, the church’s first supported missionaries. Three charter members—Randy and Mary Yager and Eunice Roberton—received special recognition; they are still members of Faith Baptist today.

Mary Yager developed a First Baptist Church Historical Summary booklet. Copies were printed and distributed for all to better appreciate the heritage of the church. Guests also received DVDs created by deacon Chad Brunicon. The church paid special tribute to members who showed extraordinary dedication and commitment to its ministry. Four of the many members receiving the Faithful Servant Award were deacon Bill and Marilyn Rhodes, who have served for 42 years, and Jim and Donna Geurink, members of 38 years; Jim is president of Baptist Children’s Home.

Guests enjoyed taking this journey back in time, recalling the many blessings of God upon Faith Baptist Church. Pastor Rich Stoll says, “God hasn’t yet come back, so there’s still more work to do.” He encouraged everyone to “roll up our sleeves and continue serving Christ faithfully in the days ahead.”