BAY SHORE, N.Y.—Calvary Baptist Church and Bethel Baptist have seen the Lord give; they’ve seen the Lord take away; now they are celebrating all that God did through Hurricane Sandy. 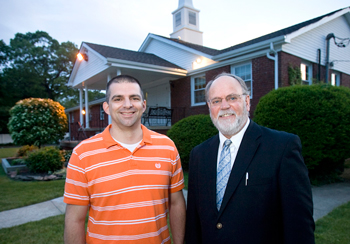 BAY SHORE, N.Y.—“The Lord gave, and the Lord has taken away; blessed be the name of the Lord.” The people of Calvary Baptist Church, Bay Shore, and sister church Bethel Baptist, Commack, know the truth of Job 1:21. They have seen the Lord give; they’ve seen the Lord take away. And, in a special joint service, they blessed the Lord’s name, celebrating all that God did through Hurricane Sandy.

After Sandy devastated their communities, these churches received aid from the GARBC through Baptist Builders Club. The Calvary-Bethel service included getting to better know the association of churches that God has used to help them minister to their communities since Sandy.

The service began with a welcome from Pastor Zac Sandiford of Calvary Baptist, followed by an opening prayer by Pastor Chris Hall of Bethel Baptist. A video illustrated the devastation left after the hurricane, and emphasized the churches’ ministry that followed. Pastor Sandiford thanked everyone for their efforts and said a thank-you to the GARBC and Baptist Builders Club.

Then the getting-to-know-you-better part began. Both churches have fellowshipped with the General Association of Regular Baptist Churches, but neither knew a lot about it. Pastor Sandiford had heard of the GARBC but hadn’t realized that Calvary was associated until after he took up his pastoral duties there. Pastor Hall and his congregation knew about the GARBC, but as he says, “We were missing the value of the association.” So Michael Nolan, director of Baptist Builders Club, presented the association’s ministries.

After talking about church planting and rebuilding with help from BBC–USA, Michael shared stories of churches that have been helped. Then he told the two congregations that they are a part of this ministry because they are part of the GARBC.

Next, Michael talked about the Regular Baptist Chaplaincy, explaining how the GARBC is an endorsing agency for chaplains of any type (military, prison, community, etc.). He showed pictures of chaplains at work, and said, “You are a part of that ministry. You are a part of this association.”

Turning his attention to Gospel Literature Services, Michael told how gospel material is sent all over the world to churches and missionaries who cannot otherwise afford it. Materials are not only being shipped but are being translated into foreign languages as well. ”You are a part of that,” he said again.

Shifting to the International Partnership of Fundamental Baptist Ministries, Michael explained that while Bethel and Calvary are part of an American association of about 1,300 churches, they are also associated with over 9,000 churches worldwide.

Michael also talked about utilizing the international partnership. Pointing out that New York represents many cultures, he said, “You have partners all over the world that can (and want to) help you understand those cultures so you can minister in your own and surrounding neighborhoods.” Michael also showed pictures from Haiti of partners who need assistance; he shared how the GARBC has coordinated a house for use by ministry teams there. “You are a part of this,” he said, “and you can still be a part of it by praying, giving, and going.”

Turning his attention to Regular Baptist Press, he said that RBP’s materials hold true to, and are firmly rooted in, God’s Word. Then, showing images of the vast curriculum offerings, Michael said, “This is your material, and it teaches what you believe.”

Before the closing question-and-answer time, Michael thanked the churches “for being in the association” and “for asking to know more about what it means and how to get involved.”