Friday: Christ, the Captain of My Soul

Friday's wrap-up from the 2010 GARBC Conference in Schaumburg, Ill. 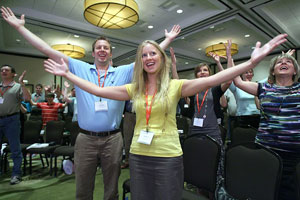 SCHAUMBURG, Ill.—“This week has been tremendous!” John Greening said, wrapping up a flurry of activity at the end of the 2010 GARBC Conference and then adding, “but we are no longer walking with a spring in our step.”

Outside the auditorium and down the hall, Pastor Dale Williams would agree. He organized local church volunteers to staff nursery and preschool programs during the week, a tireless Energizer Bunny of childcare services.

Greening also recognized the staff of the GARBC and Regular Baptist Press, thanked Kristen Nolan for organizing registrations, and Andrea Gower (his daughter) for her dedicated work as conference coordinator.

Ken Pyne was worship leader for the conference, placing a special emphasis on the reading of Scripture, mixing traditional hymns with modern worship songs, and creating a thoughtful introduction to the centerpiece of the week, expository sermons from the book of Daniel. Peggy Anderson and Debbie Pyne were accompanists for the week.

Bernie Augsburger, state representative for the Illinois-Missouri Association of Regular Baptist Churches, gave the concluding sermon from Daniel 12, and noted the awkwardness of preaching right before the Talents For Christ awards announcement. “Friday is an interesting day to be the speaker. We know you are all here to hear the message, right?” Bernie asked.

Augsburger also commented on the week of preaching. “I’m impressed how God can use so many different people whose preaching styles are not at all the same. But when you are committed to the truth of God’s Word, God can use anybody,” he said. He used his closing sermon to make the message a bit more personal, changing the theme from “Our God Reigns” to “My God Reigns.”

John Greening ended the week by illustrating the same contrast that began the week, quoting from the poem “Invictus” by William Ernest Henley.

Popularized in a recent film about Nelson Mandela and the 1995 South African rugby team, the poem ends with a humanist manifesto: “I am the master of my fate: I am the captain of my soul.”

Greening challenged the conference messengers to live out the response provided by Christian poet Dorothea Day: “Christ is the Master of my fate! Christ is the Captain of my soul.”