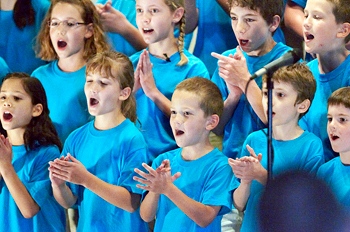 GRIMES, Iowa—A 28-voice children’s choir, under the direction of Jennifer Tylavsky, presented the musical Jungle Bungle at Maranatha Baptist Church. A children’s musical is an annual event for the church; however, this year was different. In an effort for community outreach, Maranatha presented the performance on two consecutive nights.

Two church members coauthored the musical. Don Kusmaul composed eight original children’s songs—a first for him. He says God woke him many nights with a compulsion to get his words and music down on paper. Dennis Neff of Grove, Okla., arranged the music. Dorothy Skinner wrote a drama script to enhance the music’s message of building Christian character. Kara Reu accompanied the children on the piano. The cast consisted of eight children’s choir members and Assistant Pastor Mark Stupka.

The humorous drama depicts the Crow family as castaways on a tropical island and reminds people that God is their refuge in times of trouble; He will provide for those who trust in Him. Audience members commented that the children sang with enthusiasm and that the performance brought praise to the Lord.