The seminary had planned the series of lectures to coincide with the Council on Dispensational Hermenuetics held on Sept. 24 and 25. Speaking on “Contemporary Issues in Grace,” Ryrie presented three sessions during the seminary chapels: “Law and Grace,” “Polluting the Gospel of Grace,” and “Legalism and Grace.” 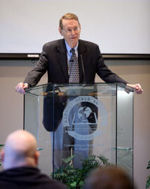 Ryrie used his Wednesday lecture to examine Gospel appeals that are made with imprecise language. He suggested that phrases such as “give your heart to Christ” were too confusing.

“Keep the direction clear,” Ryrie said. “But that’s not happening. There’s too much ‘I give’ instead of ‘I receive.’ I am on the receiving end, totally….The Gospel is about something God wants to do to me.”

Charles Ryrie, 83, is a respected author, theologian, and educator. Some of his books include Balancing the Christian Life, Basic Theology, Dispensationalism, and So Great Salvation. His Ryrie Study Bible has sold more than two million copies.

Later in the day, Ryrie attended a question and answer session with Baptist Bible Seminary students. Citing accusations from covenant theologians, one student asked how to respond when dispensationalism is labeled as a new theological development that only dates to the early twentieth century.

“It’s true,” said Ryrie, who then added, “But so what?” as the students exploded in laughter.

“You don’t test the truth or falsehood of a doctrine by its history. You’ll miss it by a mile.”