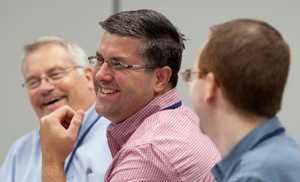 ANKENY, Iowa—The seminary professors arrive incognito, dressed in golf shirts, giving few clues that would blow their cover as fundamentalist Bible professors. Opening the thick notebooks at their seats, they begin to review 12 academic papers that will be read over the next two days, part of a little-publicized Bible Faculty Leadership Summit held on the campus of Faith Baptist Bible College.

“I’m here with guys who love the Bible and love the Lord,” says Mike Windsor, setting the tone for the day during morning devotions. “We may not agree on our interpretation of Scripture, but we agree that this is the Word of God and it is to be obeyed.”

The annual meetings are private and will likely stay that way, as they are intended to sharpen research and writing skills rather than foster any sort of public discourse. All of the represented colleges and seminaries are from the historic Christian fundamentalist tradition, but their beliefs on other matters can be surprisingly eclectic. Over time, the participants have become comfortable ribbing each other about their theological positions in a way that most people discuss sports rivalries: Calvinism, covenant theology, rapture theories, infant baptism.

This sort of collegial attitude had to be learned over time. During supper, George Houghton tells us a bit of the group’s history. Thurman Wisdom, dean of the School of Religion at Bob Jones University, invited a group of Bible professors to the South Carolina campus for informal presentations in 1995. Houghton says the highlight of the first meeting was Manfred Kober’s paper on Lordship Salvation, a measured critique delivered to an audience that included several Lordship advocates. But during the ensuing discussion, something interesting happened. The participants dropped their guard and began to ask probing questions, not to defend their respective positions, but to genuinely understand opposing theological viewpoints.

“I think there was a lot of suspicion at the start,” Houghton says of the early summit years, describing the undeclared rivalry between schools within fundamentalism. But he also suggests that such rivalries, if they existed, are a thing of the past. The participants discovered the benefits of interacting with other positions. “It makes us more careful about what we say and how we characterize opposing views,” Houghton says. Sitting next to Houghton at the supper table, Van Carpenter adds, “Now I have friends that I can go to directly when I have questions about their position.”

Most of the participating colleges eventually joined the American Association of Christian Colleges and Seminaries, which adopted its name in 1990 and formally incorporated in 2005. Having a different goal than an accrediting agency, the AACCS provides various annual events to encourage professional training and higher academic standards among its member schools. Most of the AACCS member schools are accredited through the Association for Biblical Higher Education or Transnational Regional Association of Christian Colleges and Schools. Some, like host FBBC, also have regional accreditation through groups such as the North Central Association of Colleges and Schools.

As fundamentalists, the group collectively affirms core doctrines such as Biblical inerrancy, the virgin birth of Christ, substitionary atonement, and the bodily resurrection and physical return of Christ. But on the matter of secondary doctrines, there is a bit of divergence. None of this prevents them from enjoying warm, personal fellowship, even though they would not join the same local church.

In essence, Barrett asks the listeners to consider which doctrines are at the core of their beliefs. Which doctrines will you devote your life to study? Which are the most important to emphasize with your students? Which would you die for?

Barrett introduces an idea echoed by Ken Casillas in a later presentation: fundamentalists should not claim they have a “chapter and verse” for every belief they hold. Rather, they should be willing to think carefully about the process they use to arrive at their beliefs. Some theological ideas are constructed by building Scripture on Scripture, rather than pointing to a single proof text. Some ideas are embraced because they are logically necessary for a theological system. But in such cases, Barrett transparently discloses how his beliefs influence the way he interprets the Bible. “I think we all have a hermeneutical grid that we place over Scriptures. I try to admit to mine. We may not have a chapter and verse for all that we believe,” Barrett says.

Granted, the process of learning how to articulate theological ideas can be somewhat like making sausage. If you watch it being done, you might not get very hungry. The weight of this responsibility—feeding the church—is the main reason that the summer faculty meetings remain private. While participants have commended the uniformly high quality of the papers this year, such is not always the case. Some papers in previous years have received significant critique, the sort of quiet, backroom advice that gently prods young scholars toward more diligent scholarship. The best papers presented here will later receive a larger audience, presented in public venues, and published in theological journals. Most notably, Paul Hartog will read his Polycarp paper at the International Patristics Conference, held at Oxford University, August 8-12.

Wednesday’s presentations concluded with Jeff Straub reading “Fundamentalism and the King James Version,” a paper he had previously read at a Baylor University conference earlier this spring. (A portion of this paper was also published as “KJV Only?” in the July/August Baptist Bulletin.) Straub is reading to a friendly audience, several of whom offer suggestions motivated to improve the paper before Straub presents it at a Liberty University conference this fall. Straub has made a significant contribution, containing all of the qualities the group wishes to affirm: solid research based on a close examination of primary sources, an affirmation of a key fundamental doctrine (inspiration of the original manuscripts), and a willingness to critique the aberrant theology that has influenced some aspects of the fundamentalist movement.

After the session, the group retreated to the college dorms—lodging and meals are provided by the host college and a contribution from the AACCS. Several gray-haired professors began a late night discussion in the dorm foyer, sitting on the same couches that will host similar discussions in a few weeks, when college students return to campus.

The professors will be ready.