FORT BLISS, Texas---Congratulations to Chaplain Ken Alford on his promotion to lieutenant colonel! 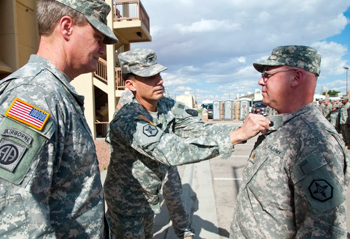 FORT BLISS, Texas—Congratulations to Chaplain Ken Alford on his promotion to lieutenant colonel!

In July 2011 Maj. Alford, a chaplain with the Regular Baptist Chaplaincy Ministries, deployed with the 364th Expeditionary Sustainment Command, a lieutenant colonel position, and was eligible for a “position vacancy promotion.” The position vacancy board was scheduled for the end of September 2011, and a below-the-zone consideration board was scheduled to happen in November 2011. For reasons known only to God, Chaplain Alford was not on either list for promotion.

Chaplain Alford writes, “I was completely confused but continued to do my job supervising 20 unit ministry team members in the brigades and battalions under our command. I had two brigade chaplains who were both LTCs and outranked me. However, their brigades answered to my sustainment command, so I would salute them and they would report to me. The one who had the biggest problem with the arrangement was me. Everyone else afforded the respect and credibility that went with my position. Inside, I struggled and questioned, until I finally gave it to God and gave up on the prospect of being promoted during this deployment. It was in His hands and I submitted to His determination. I strengthened myself in the Lord, trusting His judgment.”

During the demobilization process at Fort Bliss, Texas, Chaplain Alford was “completely taken aback” on July 20 when he learned that he had been promoted to Chaplain (LTC) on July 6. “At the close of the next day, the command called me to the front of the formation, with approximately 270 souls from our unit standing at attention. Our chief of staff, our deputy commanding officer, and our commanding general promoted me in front of all our soldiers.

“Though I could have used the promotion in theater, I would not choose to have it redone in any other fashion. God is the judge. Promotions are in His hands. Thank You, Lord, for Your timing, judgment, and Your gift in this promotion.”

Alford has been a chaplain with the U.S. Army Reserves since 1999. He was also the church-planting pastor of Family Baptist Fellowship, Graham, Wash., from 1999 to 2011 and started Prairie Baptist Fellowship, Yelm, Wash. Prior to these ministries, he was pastor of First Baptist Church, Othello, Wash., assistant pastor of Puyallup Community Baptist Church, Puyallup, Wash., and started Mid-Columbia Christian School, Othello, Wash.