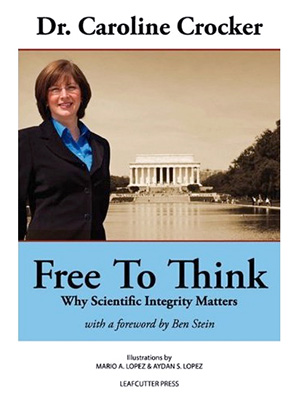 During the final years of the Berlin Wall, Christian young people in Communist East Germany had a favorite song that began with the words, “Whoever follows God will risk his dreams.” In recent years some in the academia of the United States have been experiencing that very truth. Dr. Caroline Crocker is one of those people. Her case is briefly touched on in Ben Stein’s movie Expelled. You can read the whole story in Dr. Crocker’s newly released book, Free to Think. The wife of a minister and mother of four, Caroline Crocker attained her PhD in immunopharmacology in 1999. Upon moving to Virginia, Dr. Crocker applied for work as a biology teacher and was quickly offered teaching positions: first by Northern Virginia Community College, and later by George Mason University. Her dreams were shattered a few years later.

Caroline Crocker has been the kind of professor most universities would crave. She has excellent credentials as a researcher, was a disciplined teacher, demanded honesty, was frequently thinking up ways to make her subject understandable, and continually challenged her students to think. Added to these attributes, she is a person who really cares about young people. In multiplied ways she took time and effort with students who were struggling with heart-wrenching difficulties. At the same time that Dr. Crocker received two commendations as an excellent teacher from the provost of George Mason University, she ran afoul of the wheels of ideology at her school. While she taught on the subject of evolution, she had raised questions about it, and also briefly mentioned the subject of Intelligent Design. Consequently she was told she would be disciplined, was removed from lecturing, and had her contract switched from three years to nine months. At the end of her nine months, she was not offered a new contract. Nor can she find a professor’s position anywhere else. The legal controversy and manipulations that accompanied and followed Dr. Crocker’s ejection from the university make for interesting reading (her book includes 68 pages of documents).

Caroline Crocker hopes that her book will add to scientific openness and fuel the fire that is calling for more integrity in science. “Most scientists,” Dr. Crocker told me, “want to explore and desire to find the truth. But they are inhibited from being open about their questions and about discovery by financial considerations and the worry of peer pressure.” This phenomenon has motivated her to establish the American Institute for Technology and Science Education for the purpose of increasing the efficacy of science education and scientific integrity. “There exists a pervasive myth,” she says, “that scientists and doctors are the bearers of truth and are absolutely trustworthy” (p. 24). But instead they are fallible humans—a factor Dr. Crocker insists needs to be taken into account when evaluating research. Sometimes science even involves deceit, as exposed in the recent case involving a renowned Harvard biology professor. On the question of tenure for Christians who want to teach science on the university level, Dr. Crocker calls it a difficult issue, and gives pithy advice: follow the admonition of Jesus to be, “wise as serpents and harmless as doves.”

Talking with Dr. Crocker is a refreshingly positive experience. When I mentioned to her that after all she has experienced, she remains quite positive about the future, she responded, “That is the only way I can be with the Lord I have.” At age 18, as she heard the gospel presented, Caroline Crocker listened to the speaker say, “Think about it!” She thought for six weeks, and concluded that Jesus is God. Upon trusting in Christ, she knew her life and all she did counted for Him. Since that time she has been challenging others to think. And her book will make you think.