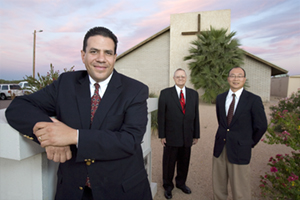 Wayne Dale stands at the pulpit, announcing the hymn to the congregation: “Número quinientos once, ‘Cristo me ama.’ ”

Then he looks at another hymnal and announces it again, “Number 251, ‘Jesus Loves Me.’ ”

A missionary with Baptist Church Planters, Wayne is a Korean American who can’t speak Korean. This visual discontinuity—an Asian guy speaking Spanish—is only the first of several that we will experience during our visit to the Phoenix suburbs.

We arrive the weekend before the November elections, when immigration is a hot issue in Arizona, a state that shares a 350-mile border with Mexico. Inside the walls of the Glendale church, two congregations have merged in a way that defies local politics. Pastor Richard Bringingstool gives us a little background, but not before he tells us that Spanish speakers and English speakers have one thing in common—no one can pronounce his name, so everyone calls him Pastor B.

Pastor B is a Korean War veteran, a combat engineer demolition expert who was trained by the army to blow up bridges. “The Lord kept me going through it all,” Pastor B says, telling how he came home from the war to attend Grand Rapids Bible Institute, then pastor GARBC churches in Michigan. He moved to Arizona and began pastoring Faith Baptist Church 30 years ago. He started to notice a demographic change around 1998, when he went out canvassing with some of his church members. “We found Spanish-speaking families all over the place,” Pastor B says. “They would say a few words of English at the door, enough for us to know they couldn’t understand what we were saying. I could hand them literature, but I couldn’t tell them about Christ.”

The church responded by calling Enoch Arellano as associate pastor in 2002. Born in Texas to Spanish-speaking parents, Pastor Enoch reminds his visitors of the wrong assumptions people make when meeting him. “Anglo Americans call us ‘Mexicans’ because we speak Spanish. But this is my country. I would fight and die for this country.” And Pastor Enoch tells us that two of his sons have served in the U.S. military, the sort of detail that helped him bond with the older Anglo members of the congregation who tend to see color in shades of red, white, and blue.

“So we ended up with three cultures in our church,” Pastor Enoch explains. “Anglo Americans, Spanish-speaking immigrants, and Hispanic Americans like me, who were born here. Our church demonstrates that the more languages you know, the better off you are!”

Now, 10 years after Pastor B first noticed the change, Glendale has become the center of the Spanish-speaking population in the Phoenix area. But despite the church’s efforts to reach out to the community, the aging congregation struggled, despite having a fine building in a good location.

Meanwhile, across town, Life in Christ Baptist Church had an opposite problem. They had a booming bilingual congregation led by Alberto Marquez, who was born in Mexico City and educated at Bob Jones University. He became a U.S. citizen in 2009 and joined Baptist Church Planters as a missionary—but their church building was inadequate to meet the needs of their growing congregation.

“I call it a puzzle the Lord put together,” Pastor Enoch says. “He uses puzzle pieces called people to do His will. And the last piece of the puzzle was David Little.” 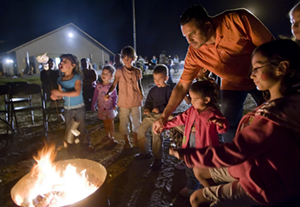 Pastor B explains this part of the story. “When I picked up the phone, the voice on the other end said, ‘Richard, this is David Little. I want to ask you a question. Would you be willing to merge with another bilingual church?’ ”

And Little, the president of Baptist Church Planters, had another delicate matter to bring up with Pastor B, asking, “Would you be willing to step down and allow the other pastor to become the lead pastor of the new church?”

The request was a reasonable idea—Pastor B is 80 and does not speak Spanish. “I didn’t want to stand in the way,” he says. “And Duane Davenport, our deacon, said, ‘This is of God.’ ”

Pastor B also made sure he told his congregation about the proposal right away. “This is isn’t my church, it is the congregation’s,” he says of the process. So in rapid succession, Faith Baptist voted to merge, then Life in Christ Baptist voted to formally dissolve and reincorporate in the newly named Faith Baptist Church–Iglesia Bautista la Fe. Pastor Alberto Marquez was installed as pastor, and was ordained by the church in December. The transition was marked by a simple ceremony where Pastor B presented Pastor Marquez with a baseball bat and ball—a fitting tribute for a town that hosts spring training for several Major League teams.

“Pastor, I’m going to play on your team,” Pastor B said, also offering a subtle change that may have gone unnoticed: He stopped calling him Alberto from that day forward. Happily accepting the role of associate pastor, Pastor B says, “He is the first pastor I have had for 50 years.”

Then I remembered something that happened just after we arrived at church, right before the Wednesday night prayer meeting. I found an older man working out back, behind the church building.

“Are you looking for the pastor? He’s up front, in the church office.”

As it turns out, that was Pastor B, emptying a vacuum cleaner and dusting off his pants before walking into the service.

All of the Arizona missionaries from Baptist Church Planters, including Adam Zamora in Buckeye, value a team approach to church planting. Recently Wayne Dale and Pastor Marquez were leading Spanish Bible studies at Desert Hills Baptist Church, helping Adam, who has a Mexican heritage but does not speak much Spanish. The idea was dropped—fewer Spanish speakers in Buckeye—but this illustrates the last part of David Little’s vision for the Phoenix churches: He wants Faith Baptist Church–Iglesia Bautista la Fe to grow, then become a mother church to plant other bilingual churches in Arizona. And while organizations such as BCP, the GARBC, and Baptist Builder’s Club have much to offer in assistance, we also have much to learn from men like Alberto Marquez and Adam Zamora.

Pastor B asks a penetrating question: “Other GARBC churches are willing to hold Hispanic services at 2:00 in the afternoon. But are they willing to bring Hispanics into their own congregation, and make them equal members? This is a crucial issue. Everyone who comes into the church must have an equal vote. And the church must develop Hispanic deacons and church officers.”

Senior Pastor Marquez has encouraged the Spanish speakers to learn English, still a hot issue in Arizona. (“Some immigrants have lived in the U.S. for 10 years and still don’t know how to sneeze in English,” says Pastor Enoch.) Church members are offered English classes led by Pastor Marquez’s wife, Adela, on Wednesday night. She’s a pro—literally. She also gives English lessons to Spanish-speaking baseball players during spring training.

But an ESL program is not unusual in Arizona churches. What makes this different is what happens out in the church auditorium at the same time as the Spanish class. A group of English-speaking church members are taking Spanish lessons from Pastor Marquez. On Sunday night, both groups have memorized a passage from Philippians, reciting to each other in their newly acquired second language.

Pastor Marquez ends the evening service with a practical bilingual benediction, just before the group breaks for a nacho fellowship: “Go out this week and be good citizens of Heaven!”

When we were talking earlier in the week, Pastor Marquez brought up one more barrier the team had to overcome. “In a third world mind-set, we don’t always think about helping each other and working with each other,” he says. 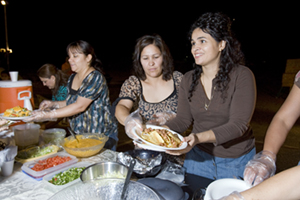 Later, at dinner, Adela echoes the same idea. “Something like Walmart would never develop in Mexico. You have your little store there, I have my little store here, and my people will never visit your church because you might steal them.”

Pastor Alberto was a bit cautious when he first learned of Baptist Church Planters—perhaps with good reason. After graduating from Bob Jones, he returned to Mexico to plant a church, teaming up with a missionary in a partnership that proved to be unfruitful. As a result, Pastor Marquez looks back and says, “I was very wary about having a mission board help us here, or working with an associate pastor.”

Having grown up in an informal cooperative of independent Baptist churches, Adam Zamora is beginning to appreciate the benefits of partnering with groups like Baptist Church Planters. His relationship with BCP director David Little led to the church joining the GARBC. Pastor Zamora appreciates BCP’s view of church planting, which is shared by the GARBC. “The GARBC has a very positive outlook on expositional preaching and teaching and holding to good doctrine,” Adam says.

The Arizona team has a clear sense of ministering to a rapidly changing world where nothing will ever be like it was—where the Korean American from New York speaks better Spanish than the Mexican American from Michigan—where the Hispanic American sends his sons off to war, fighting for Arizona Anglos who persist in calling them all “Mexican.”

And the 80-year-old associate pastor, the guy the Army once trained to blow up bridges? He spends the rest of his life building them.

After a successful first-ever virtual GARBC Annual Conference, broadcast live from Bethel Church in Crown Point, Indiana, June 29–30, one of the messages has received ...more

Sunday School curriculum and coronavirus-prevention supplies are benefiting churches in Malawi both spiritually and ...more