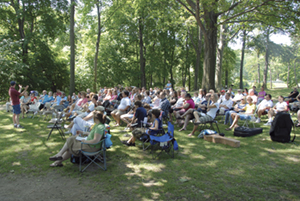 I am a bi-vocational church planter. I get up at 4:15 in the morning so I can go to work. If you ever arrive at Cleveland Hopkins Airport very early and look out the window of your plane, you may see me with those orange wands bringing your plane in safely.

I’m also ministering at my second church plant in the Cleveland area. With the help of an intern, I started a church that later became the sending church for our current church plant. And in the next 24 months we hope to be sending someone to start a third church. We’re going to surround Cleveland with more churches!

I come from a GARBC family. My mom and dad gave up Lutheranism and Presbyterianism to find a home in this fellowship over 60 years ago. At the 1974 conference in Ocean Grove, N.J., God gave me the privilege of leading my first adult to Jesus Christ. His name was Jim, the doorman at the conference hotel.

So the conversation that the Council of Eighteen has been hosting over the past few days is near and dear to my heart. In the New Testament the transition between reproducing new individuals for Christ and reproducing new churches for Christ is seamless. There is no evangelism without church planting. There is no church planting without evangelism.

One of my favorite object lessons is a ship’s prism. Back in the age of sea travel, the shipping companies would not spend a lot of money on oil to light the lower decks of the ship for the sailors. But they would drill a hole in the deck and insert a ship’s prism. The sunshine would hit that prism and scatter light into the darkness and into the shadows below deck, where those men would otherwise have no light. Today, it’s a great illustration of what it means to share Christ with a world that is lost and dying and in darkness.

One of my favorite Bible stories is about sending the light of Jesus Christ into every corner of our personal world. Did you know that God loves stories? He wrote three quarters of your Bible in narrative. This particular account is from Luke 5:17–26, but is actually found in all three of the synoptic Gospels.

In narrative and storytelling it can sometimes be a detriment if the reader knows the story too well. After all, what is the greatest tool in the hands of a storyteller? The element of surprise or suspense. Don’t you hate it when you’re reading a book and someone interrupts to tell you what happens at the end?

You probably know the Luke story very well. It is a funny story with an amazing surprise ending. Jesus had already been going from place to place healing people, but each of the three Synoptics uses the same interesting phrase to describe what is about to happen in this particular town: “The power of the Lord was present to heal them.”

Apparently there was special power from the Spirit in this particular situation. Jesus has captivated people’s imaginations, and they are following Him everywhere. The religious leaders, not to become irrelevant, are trying to catch up with the newest ideas on the religious horizon. Apparently one of the wealthier people scores the social coup of the year by persuading Jesus to visit his house. As Jesus arrives, the wealthy man has already gathered the religious leaders and lined them up in the front row at his house, with many others crowding in to meet the celebrity of the day, Jesus.

The other synoptic accounts tell us that four men have a paraplegic friend whom they want to introduce to Jesus. The four men bring their friend, let’s call him Joe, and the crowds are so huge that the four cannot possibly get Joe close to Jesus. Spying a ladder or an outside stairwell, typical of a rich man’s house, the four guys carry their friend up to the roof. Here’s where the real humor begins.

This is a wealthy man’s house, probably a highly respected man in the community. And the four guests start to dig a hole in his roof. Meanwhile, inside the house, where Jesus is surrounded by religious leaders in all their regalia, roofing material starts to flutter down on their heads. Imagine the homeowner looking up and seeing light coming through his ceiling!

Now here’s the best part: The very thing that kept the five friends away, an impenetrable crowd, keeps them safe from interference. The hole becomes larger. And can you picture the roofing material falling on all of their ornate headgear and getting in their beards? The owner is probably going nuts because, “This is my house!”

Back on the roof, Joe has started to figure out just what the plan involves, so he is screaming and holding on to anything he can, because “There is no way you are going to lower me through that hole in the roof!” (Okay, some of this is speculation, but I know what I’d be saying if I was Joe.)

And you know the story. They lower Joe into the room, Jesus forgives his sins, and today we typically use this passage to prove the deity of Christ. The religious leaders are deeply offended because only God has authority to forgive sins. But then Jesus demonstrates His authority by healing the man in addition to granting him forgiveness. The man rises and walks.

It’s a tremendous story, but for years I read it and missed the amazing surprise hidden in Jesus’ grammar. Luke 5:20 says, “When He [Jesus] saw their faith,” using the third person plural possessive pronoun “their.” Then Jesus continues and says, “Man, your sins are forgiven,” using the second person singular possessive pronoun “your.”

Now, we all know that it takes personal faith to be forgiven. But that is not God’s point here; it is not Jesus’ point here; neither is it the point of all three synoptic Gospels. This narrative says your sins are forgiven because of their faith. Now, I don’t deny personal faith was necessary, but that is not the point. The four men on the roof had faith: a belief that energizes, that loves, that overflows, that ignores obstacles, that actually opens the heart of God.

Imagine a world where God looks down on people in your community and says to them, “Your sins are forgiven because of their faith.”

The thing we’re talking about is not easy. There will be obstacles. There is an enemy. There will be well-intentioned opposition. It will require risk—the human perception of faith. It can change the world. But when we come to crossroads and forks in the road, it will not be the “plan” or “agenda” that guides, drives, and sustains us.
It will be belief.

Previous post Six Ways to Respond to a Budget Shortfall