Army Chaplain Dale Goetz, endorsed with the American Association of Christian Churches, was killed in action on Aug. 30 near Kandahar Province, Afghanistan, when an improvised explosive device struck his convoy. 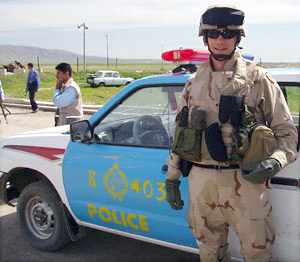 “Have you ever had something that you were so devoted to that you would be willing to die for it?”

A Baptist chaplain endorsed with the American Council of Christian Churches, Goetz had recently returned from deployment in Iraq when he posed this exact question in a 2008 editorial for The Independent of Elizabeth, Colo.

Capt. Dale Goetz, 43, was killed in action on Aug. 30 near Kandahar Province, Afghanistan, when an improvised explosive device struck his convoy.

According to the Hood River News, soldiers in a Humvee ahead of Goetz were struck by an IED. When Goetz was getting out of his vehicle to assist them, a second IED device exploded. Four other soldiers were also killed.

The first U.S. Army chaplain killed in action since the Vietnam War, Goetz had been deployed in Afghanistan less than a month.

“Dale was a selfless servant of God, a devoted husband and father, a strong American patriot, and a compassionate spiritual leader whose love for soldiers was only surpassed by his firm commitment to living his calling as a United States Army Chaplain,” said the Army Chief of Chaplains Maj. Gen. Douglas Carver in a statement.

Chaplain Goetz grew up near Hood River, Ore., a 1986 graduate of Horizon Christian School. After high school he enlisted in the U.S. Air Force, an experience that would later motivate him to join the chaplaincy. After graduating from Maranatha Baptist Bible College of Watertown, Wis., in 1995, he earned an MDiv from Central Baptist Theological Seminary of Minneapolis, Minn., in 2000.

“We are the same age, were married the same year, had our children born to us in the same years, and had been called into the ministry from similar backgrounds and have developed a similar view of ministry,” Pastor Schwenke said. “Dale was an independent Baptist to his core. He had a sharp mind for the intricacies of theology and exegesis.”

Goetz served as pastor of First Baptist Church, White, S.D. from 2000 to 2003. “His short pastoral ministry in White, S.D., brought him joy, but he longed for a ministry that would allow him to do disciple-making in a setting more suited to his gifting,” Pastor Schwenke said.

Enrolling as a chaplain candidate with the U.S. Army, Goetz was commissioned in 2004 and then deployed to Iraq for a year. He later served for three years in Okinawa before assignment to the 4th Infantry Division for the 66th Armor Regiment’s 1st Battalion in Fort Collins, Colo. Goetz had earned the Meritorious Service Medal and was a three-time recipient of the Army Commendation Medal.

“One of the most difficult messages an endorser can receive is the notification that a chaplain he endorses has been killed in action. On behalf of our Army chaplains and our entire chaplaincy family, I extend our sincere sympathy and prayers to the Goetz family, the chaplaincy family of the ACCC, and the families of the 1-66th Armor Battalion, 4th Infantry Division.

“Chaplain Goetz was a brother in the Lord as well as a brother in chaplaincy ministry. He did not deploy alone. His family was interwoven in his ministry; therefore, this loss will be felt not only by the soldiers but also by their families. Chaplain Goetz was a soldier of the cross and an American hero. It is my prayer for the Goetz family that the God of all comfort will be your portion today and until you are reunited in glory.”

Goetz is survived by his wife, Christina; three sons, Landon, Caleb, and Joel; and his mother, Hope Goetz.

Pastor Schwenke suggested churches should pray for Goetz’s wife, Christy. “She is giving glory to God for His comfort and grace in this trial,” Schwenke said. “Pray for her as she sorts through all of the various details that she will face as she puts her life back in order.” He also suggested prayer for the Goetz’s three sons and for their home church in Colorado as they continue to minister to the family.

High Country Baptist Church has established a trust fund in the name of Dale Goetz; gifts will be used to provide books and resources for chaplains to use in their ministry to the soldiers. Gifts may be sent in care of the Dale A. Goetz Memorial Fund, The Bank at Broadmoor, 155 Lake Ave., Colorado Springs, CO 80906.

Goetz’s death captured the attention of national news media, including a profile by Mark Thomson in Time magazine and tributes from Maranatha Baptist Bible College and Central Baptist Theological Seminary.

“Our love for freedom is worth dying for and many have gone before us to preserve this freedom,” Chaplain Goetz wrote in his 2008 editorial. “Some love their spouse or kids enough that they would die for them. Do you love anything that much?”