CLARKS SUMMIT, Pa.---Students at Baptist Bible College and Seminary are enjoying a new recreation center. The school dedicated the facility in a formal ceremony Oct. 12 during homecoming week. 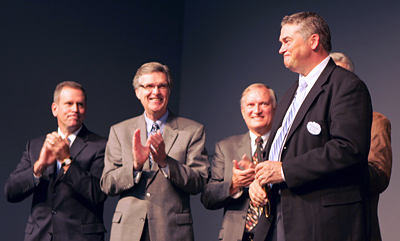 CLARKS SUMMIT, Pa.—Students at Baptist Bible College and Seminary are enjoying a new recreation center. The school dedicated the facility in a formal ceremony Oct. 12 during homecoming week.

The 62,000-square-foot facility, which saw its first use in June during summer sports camps, has quickly become a campus fixture.

“We’re especially grateful for what God has done,” said BBC&S President Jim Jeffery. “We’re grateful to those who gave generously, for their sharing and vision.” 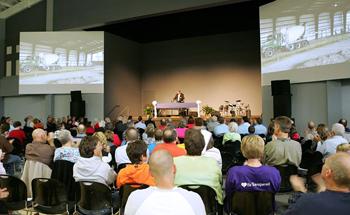 Those giving remarks during the dedication included state Sen. John Blake; Jim Burke, vice president at Luzerne Bank; John Greening, GARBC national representative and chairman of the BBC&S board of trustees; and Scott Cleveland, president of the BBC Student Leadership Council. Now a senior, Scott recalled years of walking past the area as it transformed from the site of an outdoor pool and tennis courts into the Recreation Center—a location for chapel, conferences, camps, major events like graduation, and, Scott says, “to do homework, to play pick-up basketball.”

The state-of-the-art facility includes a one-ninth-mile track, three basketball courts, a climbing wall, exercise rooms, a stage, four tastefully furnished gathering spaces, several classrooms, and major office space. An observation area near the Athletics Department offices includes tables and chairs, creating space for informal meetings or hanging out above the activity on the floor below.

“I am excited for this building to be bridge-builder between the community and our institution,” said Mike Show, director of athletics and recreation, who leads both Defender Athletics and the use of the Phelps Student Center and the Recreation Center. “It can help our students get more involved in serving and involved with people building relationships.”

If you only plan to do the Will Ketchit Skits during VBS, consider presenting a matinee performance of the Big Fish Bay Puppet Skits. Here ...more