ASTORIA, N.Y.—In the neighborhoods of Queens, CityView Church is receiving assistance through Baptist Builders Club in order to thrive. 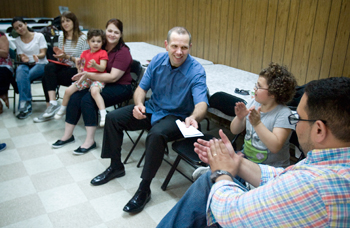 Michael and Darrell met Rob, his wife, Becky, and their kids for dinner at Burger Club one block from the church. They are regulars there, the Rodriguez family says. “How much do the people of CityView understand the association and its ministries?” Michael asked. Rob said the people know enough but that many are unchurched and new believers so do not comprehend the scope of the GARBC’s ministries.

CityView is located in “one of the most diverse zip codes in the United States, more than 100 nations together in the five-mile-square neighborhood on the northwest end of Queens,” according to the Baptist Bulletin article “All Nations Sing in Astoria.”

With the help of Associate Pastors Max Pera and Alex Morris, Rob expects the church to be self-supporting by 2016. And to help them get there, Baptist Builders Club is coming alongside with assistance.

After dinner, the group walked down the block and entered the Seventh-day Adventist building where the congregation meets. Rob explained that the city had passed a law stating that churches could no longer meet in schools, so congregations without buildings to meet in scrambled and started meeting in current church buildings.

That evening Michael and Darrell attended a meeting with the church leaders and their families. Meetings like this are a regular occurrence. Rob has been leading the group in an evangelistic study so they can start their own midweek studies using the same material. Rob said they spend a long time on just one portion of a lesson, and the discussion is rich.

After the group shared and discussed their responses, Rob introduced the visitors from the GARBC, saying that CityView is encouraged by being a part of a national association of churches and a ministry like Baptist Builders Club. Rob said to his church leaders, “These men from our national association being here is a reminder that we are not alone.”

Michael thanked the group for having them as guests and said he had an encouragement to share with them. “You are not alone, and there have been people all over the United States and the globe that have been praying for you. I also want to tell you that you are an encouragement to our entire association by your commitment to start this work in Astoria, Queens.”

Michael announced that because the church plant had submitted a Start-Up application for assistance, he was happy share that the grant for three years of assistance had been approved. He presented Rob with a $5,000 check and a letter of encouragement to the church family.