A First for First Baptist 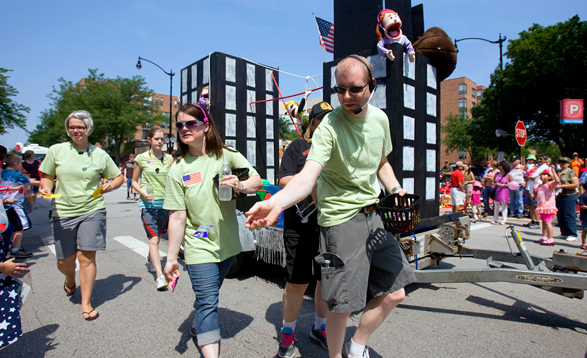 The float was designed and built by First Baptist teens and their friends under the direction of youth group member Bailey Banger. The float was styled after the 2013 Regular Baptist Press VBS theme, Investigation Destination, and it featured puppets dressed like spies climbing around a city skyline. The float placed first for creativity among 113 entries in the non-commercial category.

“I was super excited to hear that the float got an award, let alone first place,” Banger said. “And I’m very happy that people enjoyed it and wanted to go to VBS.”

The church has entered the Frontier Days parade since 2008 because of its prime exposure to such a large crowd. The village of Arlington Heights estimates between 30,000 and 40,000 people attend the parade, many of whom stake out spots along the route the night before with blankets and lawn chairs.

First Baptist typically holds its VBS program the week following the parade and uses it as an opportunity to hand out VBS invitation cards and candy to people who line the route sometimes five and six rows deep. A group of 26 people from First Baptist walked alongside the float, including one pushing a stroller, and passed out more than 3,000 VBS invitation cards.

First Baptist VBS Director Ben Burnet, who leads the outreach with his wife, Becky, said the walkers gave away about 30 three-pound bags of candy before running out of cards and candy about three-fourths of the way through the first parade.

For the past three years, the church has quickly carpooled its walkers from the end of the Arlington Heights parade to the start of the nearby Rolling Meadows parade immediately following. There, fresh walkers and a reserve of candy and invitation cards were waiting.

“We believe the parades are a great way to get the word out about our VBS,” Burnet said. “We are so thankful for the many volunteers. This year, almost all the parade walkers walked in both parades. Their spirit and smiling faces are a testimony of God’s good work in our church.”

Burnet believes the parades are major reasons for the high percentage of children who come who are not from First Baptist. The church averaged 80 to 90 children during the week. 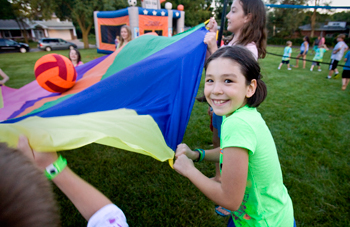 The goal of both parades is to make connections with the community in hopes that parents will send their children and hear about God’s love. Burnet said at least three children trusted Christ as Savior during the week and two others were talking to teachers about believing in Jesus.

At the end of the week, the church invites the children and their parents back on Friday evening to see and hear what their children have been learning all week. The children sing songs and recite verses related to the Bible stories they learned. Concluding the service, Pastor Bryan Augsburger always thanks the parents for giving First Baptist the privilege of teaching their children God’s Word.  He always gives a clear gospel presentation so that even those families just listening out in the foyer hear about Jesus.

Immediately after the service, the church provided a free meal on the lawn with hot dogs, cotton candy, and games for the kids. The children especially enjoyed the bouncy house and the dunk tank, where they had fun helping their VBS leaders get wet.

Pastor Augsburger likes the closing program because First Baptist adults mingle with parents of the VBS kids in a relaxed atmosphere. Members also use the occasion to tell visitors about other First Baptist programs, like Awana, Sunday School, and midweek adult Bible studies for men, women, and teens. Parents can even sign up their kids up for Awana that night.

Burnet said a number of children indicated they wanted to come back for Awana in the fall. “To our knowledge, these kids have not previously attended Awana. Some children had not heard the gospel story or even been in church before.”

In summarizing the week, Becky said, “I appreciate everyone’s dedication and commitment to make this a Christ-centered week for the children. We are thankful for a pastor that provides great leadership and sets a great example for keeping God’s Word at the center of our church.”

Pastor Augsburger said he was overwhelmed by the commitment of the church to get involved in so many areas of VBS.

“There are times in ministry when you see the church operating on an extraordinary level,” he said. “As I watched our team of workers throw themselves into our VBS this year, I was awestruck and so deeply touched by their sacrifice, by their passion, and by the many different ways people got involved. This is real church, authentic church in action; the body of Christ laboring under the enabling power of God for His glory.”

Next post Church Members Hit the Streets for VBS