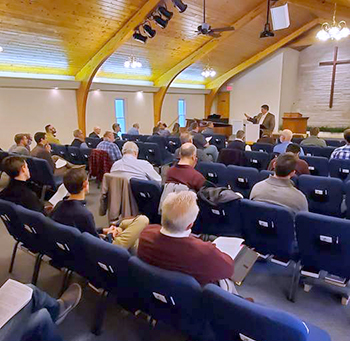 “It’s an honor to be here, because of who asked,” Ken said in his first session, “Preaching to the Unchurched.”

Though Ken graciously disagrees, event organizers say that he has a “rare ability to connect with people of all backgrounds and to communicate the riches of God’s Word to them in ways that all understand, yet without sacrificing his commitment to serious, expository preaching.”

Pastors, while they’re preaching, need to remember that they’re talking not only to Biblically literate believers but also to the unsaved, new believers, and the unchurched, Ken said in his first session. (And unchurched, he points out, does not mean “unsaved.” Unchurched people could be those who professed Christ as Savior but have not attended church before.)

While preaching, “think about what you’re saying and how it’s going to be received by those who don’t know the Bible,” he advises. Choose your words carefully; eliminate, explain, or reword Biblical terms that might be confusing, even using the words “the first part of your Bible” instead of “the Old Testament” and “the Bible says” rather than “Moses says” or “Paul says.”

“Did you have your hand up?” Ken asked, inviting the dialogue.

“I’m Paul,” the attendee said, resulting in laughter throughout the room.

In addition to this “language gap,” Ken also “explained the ‘culture gap’ and ‘relevancy gap’ between the churched and unchurched and how pastors might shape their messages to bridge those gaps,” Brandon says.

In the remaining two sessions, Ken spoke on “Cultivating Your Pulpit Presence” and “Preaching for a Lifetime.”

In “Cultivating Your Pulpit Presence,” Ken “suggested ways that pastors might become less self-conscious in the pulpit in order to develop a more natural speaking style,” Brandon says. “His suggestions were simple: they should reflect deeply on their preaching text, apply it to their own lives first, and then cultivate a passion to connect with the audience. He also encouraged pastors to resist the temptation to draw undue attention to themselves with joke-telling and other gimmicks.”

Each participant received a complete set of Ken’s teaching notes and a book on homiletics.

Next year’s Michigan Expositors Summit, on March 31, will address “Preaching Difficult Texts of the Old Testament.”