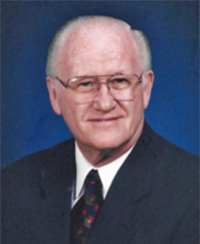 ANKENY, Iowa—Richard Fleming, longtime professor and administrator at Faith Baptist Bible College, Ankeny, Iowa, died Sept. 10 at age 86. Richard and his wife, Elnora, joined the music faculty of Omaha Baptist Bible Institute in 1957. In the school’s music department, both in Omaha and Ankeny, he taught classes and directed the school chorale. As an administrator, he directed at various times the Christian service, public relations, and alumni departments of the school, and he served for a time as the assistant to the president.

Richard Fleming was instrumental in helping Faith move from Omaha to Ankeny. During those transition years he traveled extensively with President David Nettleton and other music faculty members, promoting the college and raising funds for the new campus. Richard was even instrumental in renaming the school when it moved. He was the one who proposed the name Faith Baptist Bible College, which has been the school’s name since it moved to Ankeny in 1967.

Richard Fleming was noted for his excellence and skill in leading singing. He taught song leading classes at the college, and from 1973 to 1976 he was the minister of music at Calvary Baptist Church in Muskegon, Michigan, under Pastor Mark Jackson. One of the highlights of Richard’s ministry was leading singing at several GARBC conferences in the 1970s and 1980s, the last time being in 1987 in Ames, Iowa.

After his retirement from Faith, Richard continued to serve the Lord. He was an interim pastor in several central Iowa churches, he worked at the Ankeny funeral home by assisting families, and he held a weekly Bible study at an Ankeny nursing home.

Because of his extensive travels for the college and his song leading at the GARBC conferences, Richard Fleming was well known and respected by many pastors.

Richard was preceded in death by his wife, Elnora, and is survived by his children, Richard Fleming II and Debbie Drake, and  many grandchildren and great-grandchildren.

Posted in Ministry Highlights, With the Lord on September 19, 2017.