Sunday, Sept. 13, was Restored Church’s grand reopening for the public at their new location. The Lord of harvest gave them a packed house with over 375 in attendance to celebrate God’s provision of the former Welsh Presbyterian Church facility in Wilkes-Barre. It was a festive occasion with the freshly renovated facility packed with people excited with what God has done. 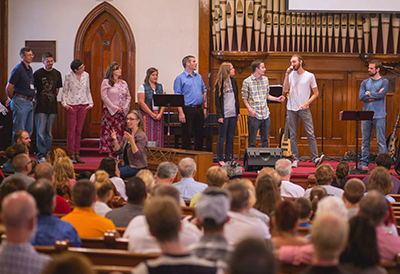 WILKES-BARRE, Penn.—Sunday, Sept. 13, was Restored Church’s grand reopening for the public at their new location. The Lord of harvest gave them a packed house with over 375 in attendance to celebrate God’s provision of the former Welsh Presbyterian Church facility in Wilkes-Barre. It was a festive occasion with the freshly renovated facility packed with people excited with what God has done.

Just three years old, Restored has certainly seen the blessing of God with growth both in size and community influence. Dozens have had their lives transformed by the Gospel. On this celebration Sunday, two young adults gave moving “grace stories” (testimonies) of how Christ had delivered them from a life of dissipation.

From the beginning, Restored has ministered under the publicized core value, “No Perfect People Allowed.” More than a slogan, this has attracted lots of broken people. It’s also provided opportunity to share with many that Jesus is the only perfect one—and so we all need a Rescuer/Redeemer. The hope-giving slogan is prominently displayed over the entry into the beautiful auditorium.

Restored’s shepherding pastor, Tim Walker, a Baptist Bible Seminary student, feels the slogan is a good fit for Wilkes-Barre: “Our city has a lot of traditional church culture that says people must clean up their act and dress right before they can come in.”

Restored’s new location, in the “Heights” section of the city, an established residential neighborhood, teams with a diversity of ethnic peoples. Many are unchurched. Responding to this challenge and opportunity, Restored leaders are seeking to meet and befriend their new neighbors. They’re asking God to help them become a more multiethnic congregation, reflecting local demographics. Prominently painted across a mural of the city skyline in the renovated lower level of the facility is another core value: “In the City for the City.” The visual reminds their people of a key ministry objective—to see urban transformation, one life at a time, one neighborhood at a time.

The full basement also includes a coffee bar and beautifully equipped space for “Restored Kids,” the church plant’s Sunday Children’s Church ministry. On grand opening day 54 children were ministered to and told about Jesus. Once funding is provided, plans are to finish and equip a youth center in the surprisingly large lower level. With a separate outside entrance, Restored hopes to invite in scores of neighborhood youth for weeknight fun, food, and fellowship.

Throughout the summer, dozens of volunteer teams from partner churches came to Wilkes-Barre to work alongside church members, to renovate and restore the 100-year-old building. Six interns—lodged in the next-door parsonage for the summer—also pitched in. Restored leaders estimate over 200 people volunteered to help, saving the church thousands of dollars. Volunteers removed a Dumpster of trash, erected new walls and drywall, painted, did plumbing and electrical work, designed signs, banners, and murals, etc. Some $30,000 was given by God’s people and immediately spent on supplies and new technology.

The beautiful upstairs foyer area now contains a new Welcome/Information Center, a renovated nursery area for both babies and infants, a beautiful nursing room for new moms, and a computer-driven center for parents to securely check in their little ones.

Amazingly, the entire half-acre property—including a 350-seat auditorium, and four-bedroom parsonage—was purchased using a $100,000 gift from an anonymous Christian businessman, impressed with what God has done in Wilkes-Barre over the last several years. God’s blessing was also evident in the $7,000 offering received at the opening service.

Grand opening attendees included scores of first-time guests invited by Restored regulars or notified through social media. A highlight of the 90-minute service was the platform introduction of Restored’s leaders—pastor-elders, deacons/deaconess, house church, and other team ministry leaders. Representatives from a number of Northeast Pennsylvania churches and ministries were also present to help dedicate the facility and Restored’s leadership team.

Please rejoice with us at the advance of the Gospel in Wilkes-Barre. To learn more about Restored’s ministry and see more pictures, see their website and Facebook page.

Ken Davis is director of church planting for Project Jerusalem, a ministry of Baptist Bible College and Theological Seminary. This article originally appeared in Project Jerusalem’s newsletter and is reprinted here with permission. Restored Church was welcomed into the GARBC in 2012, and in 2014 received a $5,000 grant under Baptist Builders Club’s Start Up plan that assists church plants. Read how Restored Church met its new community and began ministering to locals before it even relocated in “Open-air Sunday service in Wilkes-Barre offers message of hope” from the Wilkes-Barre Times Leader.