In January, the Baptist Bulletin reported that the GARBC was positioning itself to make church planting a major priority in the immediate future. Funds were set aside and an initiative was launched to make this dream a reality. 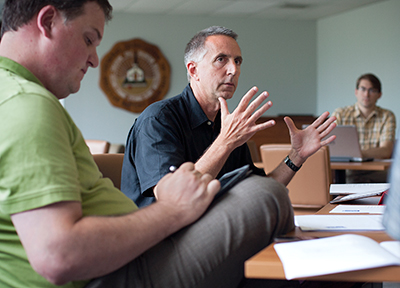 In January, the Baptist Bulletin reported that the GARBC was positioning itself to make church planting a major priority in the immediate future. Funds were set aside and an initiative was launched to make this dream a reality. At the 2015 conference, the initiative’s name (Regular Baptist Church Planting) and logo were unveiled. Now, the momentum is steadily increasing as the church-planting task force labors to make this dream a reality.

A major watershed was reached Aug. 10–12, as the members of the task force assembled at the resource center in Arlington Heights, Ill., to make some major decisions. Their goal was to nail down the key policy decisions that will determine how the initiative operates. Specifically, the group drew up plans for an administrative infrastructure to support the church-planting enterprise and explored options to keep the initiative financially viable for years to come. These proposals will be presented to the Council of Eighteen for approval at its upcoming meeting in November. As a result of the groundwork laid during these three days in August, it is possible that Regular Baptist Church Planting could launch within the next year.

“One of the most important issues addressed by the task force was the need to ensure that the GARBC church-planting endeavor is a truly collaborative effort,” says Ken Floyd. The intent is not to supplant the important work that dedicated Baptist church-planting agencies are already doing, but rather to come alongside and work cooperatively with them to encourage and facilitate the planting of new Regular Baptist churches. With God’s blessing, the task force hopes to see 100 new churches planted by 2025.

“We are not reinventing the wheel, but putting together an effort of coordination,” says David Burman. “As an association, we have so many resources and network connections available to our churches and to church planters that are in agreement with us doctrinally. Multiplication should be our goal.”

Much work remains to be done between now and November, when the task force will meet again. Numbers will be crunched, resources will be designed, and hiring decisions will be considered. But for now, significant progress has been made. “I was impressed with the group’s level of creative thinking and collaboration,” says John Greening. “I honestly believe we came up with a workable church-planting model that respects the unique nexus of churches, associations (local, state, and national), and agencies forming our Regular Baptist network. We realize there’s plenty of work ahead, but with God’s help, in the not too distant future, we can together see sustainable church multiplication marking our fellowship as much as our commitment to truth.”