Memorial Baptist Church is reaching bikers for Christ, most recently through a Biker Brunch/Toy Drive. We continue to build relationships with these men and women," says Pastor Tom Wright. 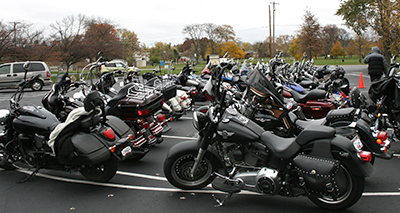 COLUMBUS, Ohio—Memorial Baptist Church is reaching bikers for Christ, most recently through a Biker Brunch/Toy Drive. This was the eighth year Memorial Baptist has hosted this event, and “we continue to build relationships with these men and women,” says Pastor Tom Wright.

About 150 bikers attended Nov. 1, in addition to about 50 of Memorial Baptist’s own people who served. Two chefs in the church helped prepare the large brunch. “Imagine how much food it takes to feed 150–225 bikers who expect seconds and thirds and plenty of it,” Wright says. “It takes us two days to prepare all the food.”

The toy drive portion of the event benefited over 70 children in Angel Tree, a Prison Fellowship program that reaches out to the children and families of inmates. The bikers filled a classroom in the church with toys for these kids and gave donations of over $1,000. The church will use that money to buy clothes and shoes for the kids and a complete Christmas dinner for their families, as well as send some of the children to summer camp. With permission, the church takes pictures of the Angel Tree kids opening their gifts each year and shows the photos to the bikers when they come to the church in the spring for Biker Sunday.

The day after the brunch, two of the bikers attended Memorial Baptist Church, with several more promising to visit in the weeks ahead.

Memorial Baptist’s Biker Brunch/Toy Drive began in 2006 when the president of the Avengers biker club came to know Christ at Memorial Baptist Church right after he got out of prison. Gary’s wife, Sharon, had attended the church’s Awana program when she was child and remembered the kindness showed to her. Gary told her he thought they ought to go to church. “But what church would accept me?” he asked. She said, “Let’s go back to that church that loved me as a kid.” They did, with Gary coming to Christ and Sharon renewing her faith that she had found during her Awana years.

Gary had a heart for his unsaved biker buddies, and after hearing about Memorial Baptist’s ministry with Angel Tree kids, he immediately felt a connection as a former inmate. He told Wright, “Pastor, if we would feed these guys, I think they would bring toys in for these kids and we could share the gospel with them.” Forty bikers showed up for the first brunch and toy drive, and the event has been growing every year.

At the bikers’ request, the church added Biker Sunday the week before Memorial Day; 75–100 bikers show up for church and an onsite barbeque picnic. And in the fall, the church holds a Community Carnival for the children in its community, and many of the bikers help and bring their kids.

In the fall of 2012 Gary was called Home to be with Christ after suffering with cancer. At his request, his funeral was held at Memorial Baptist Church; over 700 Avenger bikers from nine states attended. The Columbus Police directed traffic, and several bikers have since trusted Christ as their Savior. Since that time, six bikers’ funerals have been held at the church, and Wright has continued to build relationships with the Avengers.

Pastor Wright wondered what would happen after Gary’s Homegoing. He says, “The day of Gary’s funeral, the new president of the Avengers, one of the most wicked and gospel-resistant of all the bikers I have met, came to me and asked if they could continue this effort in Gary’s memory. His words were, ‘Would you work with me to keep this going?’ He is slowly softening as we continue to have conversations and plan these events. Gary warned us it would be slow-going with these guys, but he counseled us to keep after them.”

The toy drive is now called the JY Memorial Biker Brunch/Toy Drive. JY was Gary’s nickname among the bikers. Wright occasionally encounters bikers who stop him and ask if he is the pastor of JY’s church. They often give donations to the church on the spot and listen while he shares the gospel with them. Wright has led one of Gary’s daughters to Christ. Her husband is not saved yet but is coming with her to church, and their son is now attending the youth group. The husband and wife are both Avengers. Gary’s other daughter, also an Avenger, is not saved yet but comes to church occasionally. Her children have started coming to church and are loving it. Gary’s best friend and longtime Avenger buddy, “Shooter,” trusted Christ last year.

Memorial Baptist Church has given its biker friends Gary’s testimony on CD as well as black biker Bibles with a gold motorcycle embossed on the front and the plan of salvation affixed to the inside cover. “We keep them in supply and are regularly asked for copies as bikers stop by the church ‘for one those neat Bibles,'” Wright says.

“We have no idea where God will take this ministry or how much longer this ministry will continue. Gary’s wife has moved from our area, so our contacts are just with these unsaved biker leaders. Other churches ask us how to start a biker ministry. We tell them that we don’t know, except to lead one of those bikers to Christ and see what happens.”

Many Avenger bikers consider Wright their pastor. “I am not sure where that information goes and if I should be a bit concerned about my reputation,” he says. “But I take it as God’s open door to continue to pray for and plead with these dear people who so desperately need Christ.

“Many in this biker community believe that they are beyond redemption. With the drug dealing and addiction, the law-breaking lifestyles, the alcohol addiction and prostitution that is taking them into hopeless dead ends, it is such a privilege to share with them the hope that is found in Christ alone. We do love them and long for their salvation. We need your prayers as we continue to find ways to share the gospel with them.”