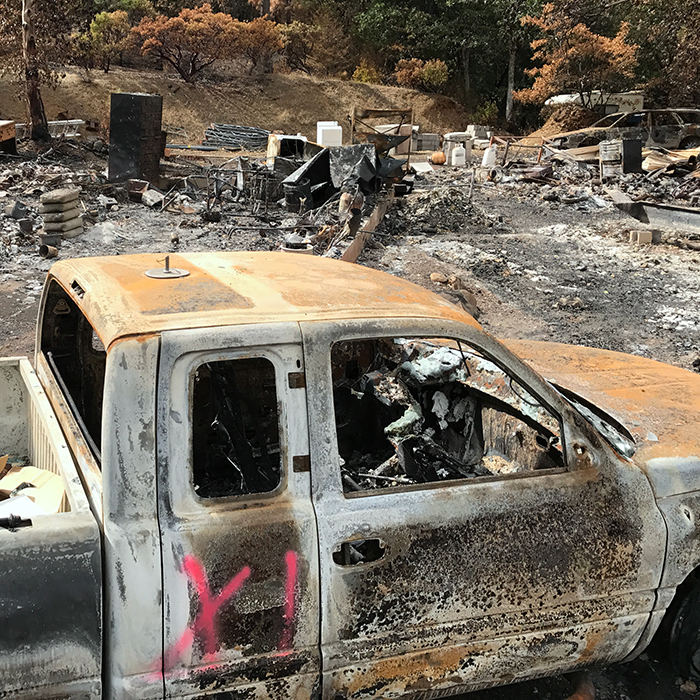 WEAVERVILLE, Calif.—Wildfires in Northern California have destroyed the homes of families who attend Regular Baptist churches.

In Weaverville, the fires claimed two homes belonging to members of First Baptist Church. Pastor Jay Underwood reports that both houses were destroyed but, thankfully, no one was seriously hurt. “We lost a total of 72 homes to the Helena fire just outside Weaverville,” Underwood says.

Fortunately for the Westbrook family, they were at their second residence in Castroville, California, when the fire broke out. The house they lost was to go up for sale soon, but they had fire insurance. However, Bill Eddy, the other homeowner, was not insured and still plans on rebuilding. “I was set to retire, but I guess God has other plans,” Bill says. The church has set up a fund to help Bill with immediate needs as well as rebuilding.

“One of the blessings to come out of this horrible disaster is to see the whole community come together to help in a time of need,” Pastor Underwood says. In fact, First Baptist opened its gymnasium to the Red Cross and became an evacuation center for two weeks before firefighters contained the fire and families were allowed to return to their homes.

“This was not the first time we have been an evacuation center,” church secretary Sue McChristian says, “but this is the first time it has been for this long.” Sue explains that the Red Cross organized the shelter and brought in cots for people to sleep on, and the Salvation Army brought in and prepared food. “We had a maximum of 15 or 16 people who stayed in the gym until family or friends were able to take them.”

Sue says that some First Baptist members have partnered with area churches by gathering food, clothing, bedding, and other household items to distribute to fire victims. Underwood hopes that First Baptist’s involvement with helping fire victims will be a good testimony to the community. “Certainly, we want to show the love of Christ to those who are hurting and need help. We also hope that our involvement helps to build bridges with our community for the sake of the gospel. I already have gotten positive feedback from folks not a part of any church. In fact, one neighbor on my street remarked how pleased he was that we opened our doors as an evacuation center. He believed that we were doing what churches ought to be doing.”

In Windsor, California, God has protected First Baptist Church, although the wildfires destroyed the homes of some of the church’s members.

Jeff Marshall, administrative pastor of First Baptist, says, “We were surrounded by fires, but they never got close to us. The church property is safe and is not in danger.” Marshall says the area was under a voluntary evacuation; the situation did not become severe enough for a mandatory evacuation.

However, four of the church’s families lost their homes. Those families have relocated, staying with other family members or renting housing. “Financially, they are okay for now,” Marshall says. “They are settled and not in shelters.”

In the short-term, the needs of these families are being met, but they are still assessing their long-term needs. Regular Baptist Builders Club has reached out to First Baptist Church to offer assistance and is in contact with Bruce McLain, state representative of the California Association of Regular Baptist Churches, to help monitor the needs of GARBC churches in areas affected by the fires.

In addition to these four families, five families whose children attend First Baptist’s Christian school lost their homes as well. Other people lost their businesses. “A number of families’ businesses burned down, so they can’t go to work and pay their rent or their mortgage,” Marshall says. “Those kind of expenses are hitting them now, and they are not sure what FEMA and their insurance will cover.”

On its Facebook page, First Baptist Church has been posting contact information of centers that are distributing school supplies and household necessities. Supplies and volunteers are needed.

“This fire has had a wide-reaching effect,” Marshall says. “We know that there will be long-term financial needs in addition to the short-term needs. We are still assessing needs and continuing to support the church members, regular attendees, and ministry families in our Christian school affected by the fire. We are also actively working with other churches and the community to share Christ’s love.”