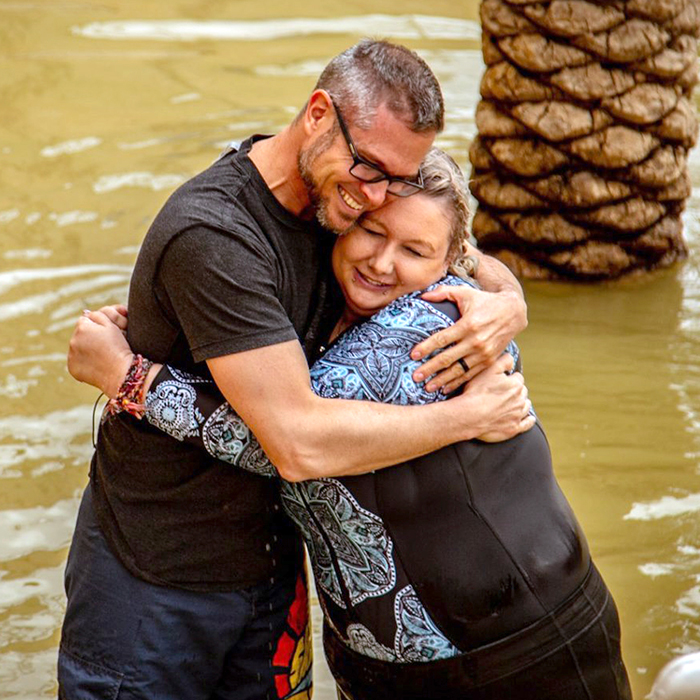 Pastor Aaron Patton and Jeremy Dykeman, pastor of student ministries and media, shoot footage for a sermon in Israel.

KANSAS CITY, Kan.— “The more you understand the world of the Bible, the better you can understand the words of the Bible,” says Aaron Patton, pastor of New Story Church and board member of Regular Baptist Builders Club. For the last five years this statement has driven New Story Church to lead its people on trips around the world to study the lands where events in the Bible actually occurred.

Each year New Story Church takes 15–25 people to Israel, Jordan, Turkey, Greece, Rome, or Egypt “to teach God’s Word on location,” Aaron says. This year the church took a group to Israel and Jordan Feb. 2–14. The group spent those two weeks “walking where Jesus walked and experiencing where our Bible was written.”

On that trip Aaron baptized church member Krista Owen in the Jordan River. He also, with the help of the church’s creative team, filmed a sermon series that he will share with his church later this year. “We understand that not everyone can go on these trips, so while on location we film full-length sermons designed to bring sites to life,” he explains. (See one of the latest on-site sermons, filmed in Rome, at vimeo.com.)

At the top of Mount Arbel in Israel, a group from New Story Church captured this reminder of God’s promises.

The series he filmed on this trip is called “Promises, Promises,” about the promises of God. The group members got a reminder of those promises as, on the last day visiting the area around the Sea of Galilee, the group stood on top of Mount Arbel and saw a beautiful rainbow. “Looks like God is a fan of the new teaching series,” Aaron says.


“I long for every Christ-follower to get to travel to Israel at some point in their lifetime,” Aaron says. “To have the opportunity to visit the only places on earth that the only One Who died for your sins ever lived is an opportunity I don’t think you should pass up. I can’t think of a greater honor than to experience a visit to Israel with a group of Christ-followers.”

If you are interested in learning how New Story Church leads trips like this one or how to film on-site, email info@newstory.church.