Memorial Baptist Church is mourning the loss of Joey Riley, an Army sniper who was killed by a suicide bomber in Afghanistan. 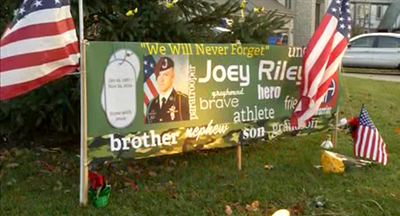 COLUMBUS, Ohio—Memorial Baptist Church is mourning the loss of one its members. Joey Riley, an Army specialist, was killed while on duty in Kabul, Afghanistan, Monday, Nov. 24. He was 27 years old. His dad, Rod, worship pastor at Memorial Baptist, says, “We are proud of our son and the sacrifice he made. He loved the Army and felt strongly that freedom is worth the fight.”

Pastor Tom Wright had known Riley since his birth. He trusted Christ as his Savior as an 8-year-old at Memorial Baptist. He drifted away from the Lord in his college years, but “about three and half years ago,” Wright says, “he showed up in my study, weary of being away from Christ. In tears he dropped to his knees and renewed his walk with Christ. The change was dramatic.”

Riley enlisted in the Army in June 2012. Generals and enlisted men testify that he was an outstanding testimony to his Army buddies. Children’s classes and small groups from Memorial Baptist regularly sent him care packages that he shared with others. In fact, his dad relates that soldiers would go with Joey for mail call before checking their own to see what goodies he received from his church.

Riley was assigned to 1st Battalion, 508th Parachute Infantry Regiment, 3rd Brigade Combat Team, 82nd Airborne Division, Fort Bragg, N.C., in March 2013. Knowing from his parents that Riley was seeking Christian fellowship, Chaplain John Murdoch, director of Regular Baptist Chaplaincy Ministries, connected him with Chaplain Jeremiah Cates as they were both serving in Afghanistan. Through e-mail and phone conversations, they were able to bond as brothers in Christ who were serving their God and country in a theater of operations. Upon hearing the news of Joey’s passing, Cates said to Murdoch, “Our hearts are broken for the Riley family. Please pass on our prayers and condolences to them.”

Murdoch spoke to Riley’s mom, Michelle, the evening of Dec. 6, thanking the Riley family on behalf of the GARBC chaplaincy for the ultimate sacrifice they have made for our freedom. The Lord has sustained them, she says, adding that they are thankful for the support they have received from the Army, the community, and their family in Christ. “Our nation has lost a hero,” Murdoch says, “and our family has seen a brother graduate to glory.”

On Nov. 24 he was on reconnaissance patrol when he was killed by a suicide bomber on a bicycle. Another soldier was killed as well, along with six Afghan civilians. Since the news of Riley’s death arrived, several people from Memorial Baptist have come to Christ, some in response to Wright’s message the following Sunday, “Can There Be Triumph in Tragedy?” 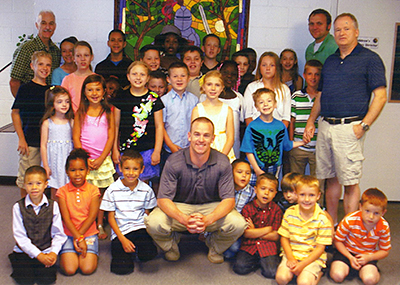 Joey Riley, who died in active duty Nov. 24, loved the kids at Memorial Baptist, Columbus, Ohio, and they loved him.

Triumph can come out of tragedy, and theologically, Christians believe that, Wright says. The breakdown comes when tragedy knocks on our own doors. Jeremiah 18 teaches us two lessons, he says. First, “we are like clay; in other words, we can’t know what’s best for us.” Like clay, we are easily damaged and quickly harden, so “we must be handled by a divine Expert.” He continues, “Clay that is allowed to remain hard eventually breaks.” Christ carries us through tragedy.

Second, God wants us to think of Him as a potter. The Potter’s hands, Wright says, are loving and gracious and filled with love for the clay.

A funeral service took place Saturday, Dec. 6, at First Baptist Church in Grove City, whose auditorium could accommodate the anticipated number of attendees. An estimated 700 people crowded into the church for the service, with several hundred more outside. Over 1,000 people lined the street leading to the cemetery. In attendance, with some participating in the service, were the mayor of Grove city; senators; congressmen; generals; Joey’s whole platoon (except for the four en route from Afghanistan); Staff Sgt. Justin Graham; and Capt. Tim Crawley, Joey’s Army chaplain, whom the Riley family discovered had attended Faith Baptist Bible College, Michelle Riley’s alma mater. Read “Soldier from Grove City laid to rest” in the Columbus Dispatch.

Along with his parents, and Rod and Michelle, Riley leaves behind a sister, Cortney Duncan, and a brother, Justin.

A memorial fund has been established in Riley’s name for the children in Nicaragua whom missionary Mark Holsinger and his family minister to. Joey’s mom was part of a Memorial Baptist missions team that went to Nicaragua a few weeks ago to work alongside the Holsingers. Via Skype, she told Joey all about the trip and showed him pictures. Joey was touched and wanted to go there someday to help. The fund will aid the feeding centers, camps, and programs for the kids, and transportation for the kids and those who are working with them. Contributions may be marked Joey Riley Memorial Fund and sent to Memorial Baptist Church, 2435 Eakin Rd. Columbus, Ohio 43204.

Posted in Church News, Ministry Highlights, News, With the Lord on December 9, 2014.