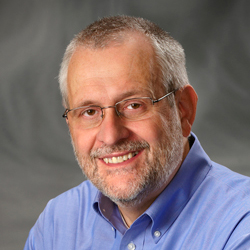 Mel Walker, who invested his ministry in impacting students for Christ, died Dec. 2. He was 67.

Mel served for four decades as a youth ministry specialist, a role he committed his life to after he accepted a speaking opportunity in college. Mel attended Clarks Summit University (then called Baptist Bible College), where he was a starter on the basketball team.

The summer after his freshman year, “one of his coaches asked Mel to speak to a group of kids at a sports camp hosted at CSU,” relates Emily Gehman, a 2012 graduate of Clarks Summit University. “He’d never spoken anywhere before, but he said yes anyway.”

Mel told the group his story of being injured while playing basketball and, while recovering from surgery, rededicating his life to Christ. Mel shared the gospel with that group, telling the kids about the life-changing love of God. “Afterward, someone came to him wanting to know more about Jesus,” Emily says.

“God used that experience to be the thing that made me realize that this is what God wanted me to do for the rest of my life—work with kids,” Mel said.

After serving at Calvary Baptist Church, Mel taught youth and family ministry courses and worked in administrative roles at Faith Baptist Bible College and then at Clarks Summit University.

“Mel Walker was ‘Mr. Encouragement’ to me and scores of others,” says Jim Lytle, president of Clarks Summit University. “I knew that when Mel said he would pray for me, he did. At Clarks Summit University, he was a faithful servant in a series of roles, and all of them involved the development of programs for students’ benefit or helping students (and alumni) grow their skills for serving Jesus. When Mel was selected as Alumnus of the Year, no one was surprised and everyone cheered!”

In 1985, seeing a need to train, connect, and encourage youth workers, Mel cofounded and began serving as president of Vision for Youth, Inc. Through Vision for Youth he helped host the National Youth Ministries Conference, an annual training conference for youth workers; led inner-city outreach events each summer; and produced resources for youth workers and students. Those resources include some of the 13 books Mel has written, such as his 2018 book, Going on for God.

Around the same time Going on for God was released, Mel began a ministry of the same name. Through the Going on for God ministry, while remaining president of Vision for Youth, Mel consulted with churches across the country to help them reach and impact emerging generations for Christ. He also organized and led seminars for church leaders and parents to help young people stay in the church and mature in their faith.

Mel Walker talks with teens during a 2004 GARBC Conference student event at the top of the Willis Tower in Chicago.

Through both Going on for God and Vision for Youth, Mel spoke to thousands of teenagers, young adults, parents, and ministry leaders around the world each year at conferences and seminars, including the Annual GARBC Conference.

“Mel was a Johnny Appleseed type man who scattered the seed of creative compassionate youth ministry around the world,” says John Greening, former national representative of the GARBC.

“The ‘much’ fruit of the resulting ministry trees will be rewarded in Heaven. He was a Pied Piper type servant of the Lord, not for self-aggrandizement, but out of a passion to reach teens. He attracted around him likeminded youth-focused servants who are multiplying his vision for youth in far reaching ways. There is a big hole today that will not be easily filled.”

Throughout his career Mel also held additional roles: He was editor of the junior high and high school Sunday School curriculum for Regular Baptist Press. He was an adjunct faculty member at Baptist Bible Seminary and Word of Life Bible Institute in Germany. He led a college-age young adult ministry at Heritage Baptist Church in Clarks Summit, where he was a longtime member. And since 2017, he was a part-time youth pastor and assistant pastor at Wyoming Valley Church, Wilkes-Barre, Pennsylvania, where his son Todd has been pastor since 2018. Todd calls his father a “ministry mentor.”

“My legacy, I know, is not a big deal,” Mel has said. “But if I can impact the generations after me, then I’ve done something that matters for eternity.”

Mel is survived by his wife of 45 years, Peggy; three children, Kristi, Todd, and Travis; and 10 grandchildren.

A memorial service will take place at Heritage Baptist Church, Clarks Summit, Pennsylvania, Dec. 7 at 6:00 p.m., with visitation at Heritage from 4:00 to 6:00 p.m. The service will be livestreamed at https://youtu.be/0FQUatxWnVY.