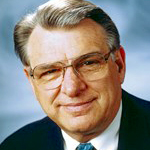 Byron Center, Mich.—James M. Huckaby, 81, died Dec. 18, 2018, after a long illness. “Coach Huck” was a winning basketball coach, athletic director, and administrator at Clarks Summit (Pennsylvania) University, who desired to touch the world through those he trained.

As a young adult, Jim read a gospel tract and received Jesus as his Savior. From then on, he had a burden to please the Lord and felt a calling not only to reach the lost, but to train men and women to serve the Lord in full-time Christian service.

Fulfilling that calling to train adults, Jim coached at Los Angeles Baptist College and Western Baptist College (now Corban University) in Salem, Ore., before moving his family to Pennsylvania, where he served at Baptist Bible College, now Clarks Summit University, for over 40 years.

At CSU Jim had a stellar record, leading his teams to 17 conference championships and “dominating opponents with a 212-12 record.” His teams were nationally ranked for over a decade, reports the CSU website. Jim was the NCCAA’s Coach of the Year in 1976 and 1979 and was inducted into two halls of fame: the National Christian College Athletic Association Hall of Fame (1991) and the Pennsylvania Athletic Hall of Fame (1999).

Combining his passion for evangelism and discipleship, Jim founded CSU’s Teen Leadership Conference, which will celebrate its 50th anniversary this summer; Defender Five, a traveling sports ministry; Big Blue Sports Camps; and Defender Sports Camps. He led teams of alumni and students on six overseas trips to conduct coaching clinics and basketball camps. He also worked closely with local churches to develop meaningful outreach and discipleship ministries and established a minority scholarship at CSU for those who have a passion for evangelism.

As the school’s director of athletics, Jim initiated the entire women’s athletic program and added cross-country, wrestling, tennis, track and field, and golf to the men’s program. He provided key direction as the NCCAA II was formed and later served as chairman. He also cofounded the Abington (Pennsylvania) Youth Soccer program and worked closely with the town’s youth basketball league.

Though Jim accomplished a great deal for CSU and Christian college athletics, his passion was to serve Jesus faithfully and influence others for the Lord. Jim told a reporter in a 1979 interview, “I’m able to invade [players’] lives personally and they’re able to invade mine. We’re able to grow together spiritually. They’re more than just my athletes; they’re my very close friends. [They] will in turn touch the world.”

Jim was preceded in death by his wife of 54 years, Marie Gieszl Huckaby. He is survived by their two sons, Scott and Stephen; a daughter, Lori; four grandchildren; his brother John; his sister, Joyce Paulson; and several nieces and nephews.