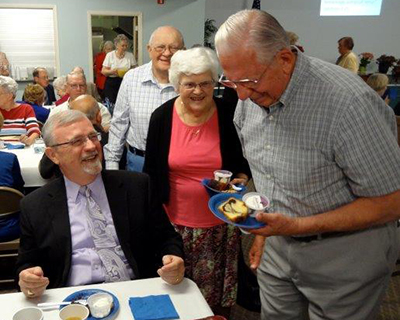 SEBRING, Fla.—Maranatha Baptist Church honored Gerald Webber upon his retirement as pastor. A record crowd gathered for a reception on the evening of March 29 to wish him and his wife, Kathy, well and thank them for their ministry.

Dr. Webber has been pastor of Maranatha Baptist Church since June 2006. His career in full-time ministry has included both the pastorate and missions. He pastored several churches before being accepted by Baptist Mid-Missions in 1978 for a church-planting ministry in New Zealand. From 1984 to 1991 he served with BMM as field administrator for North America, Asia, and the Pacific. He then served for 15 years as president of Continental Baptist Missions, from which he retired in April 2006. He is currently a member of the GARBC Council of Eighteen.

At his retirement reception, Dr. Doug McLachlan, chancellor of Central Baptist Theological Seminary of Minneapolis, gave a stirring message, “A Testament of Triumphant Faith.” Drawing from 2 Timothy 4:1–5, he compared the apostle Paul’s ministry with that of Dr. Webber. Both Gerald and Kathy’s ministry has been God-centered, not man-centered, truth-centered, not myth-centered; and gospel-centered, not gimmick-centered.

The church family gave the Webbers a generous gift and say the couple will be greatly missed.

Maranatha Baptist Church is located in Maranatha Village, a Christian retirement community in Sebring and is the home church for many of its residents. (Read “GARBC Retirement Community Celebrates 40 Years.”)