Emmanuel Christian School in Toledo celebrated its 50th anniversary with a weekend of special events. 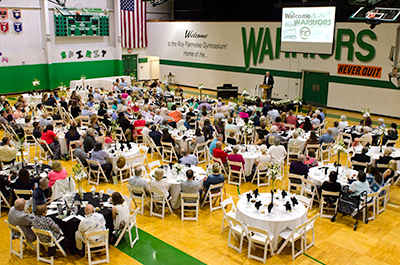 Former administrators, alumni, and current school families enjoyed reminiscing at a picnic on the school grounds on Friday night, June 9. The next day’s events included a history walk through a display of photos and memorabilia and a formal banquet in the school’s gym. Several guest speakers shared memories of their involvement in Emmanuel’s beginning as well as key milestones such as rebuilding the school after a fire in 2005. The weekend of celebration concluded with fellowship at Emmanuel Baptist Church on Sunday, June 11, and a message preached by alumnus David Ryan, pastor of Grace Baptist Church, Canton, Ohio.

In the early days of the Christian school movement, the pastor and members of Emmanuel Baptist Church desired to provide young people with a Biblically based, academically rigorous education that would equip them for vocations or Christian ministry. Initially about three-fourths of the students came from Emmanuel Baptist Church families, but today the student body of nearly 350 represents 71 churches.

The school began with a kindergarten class in 1967 and added grades over the next 10 years until the school educated students in kindergarten through 12th grade. Emmanuel Christian School purchased land a quarter mile from the church in 1976, and grades 7–12 transitioned from meeting in Sunday School classrooms to their own building on Feb. 14, 1977. In 2001, the school built a two-story elementary building and a second gym. An athletic complex with soccer, baseball, and softball fields are also part of the school property. Today ECS operates as an independent 501(c)(3) with its own board comprising church and school personnel, but it remains a vital ministry of Emmanuel Baptist Church.

“Stronger at 50” was the motto for the past school year and the anniversary celebration. Many participants in the anniversary weekend came from the first generation of students and parents. They are often referred to as “those who picked up the rocks.” Just as Joshua used stones to help the Children of Israel remember their past and God’s deliverance, the original families involved in ECS use a reference of stones to remember the financial and physical sacrifices that people made to start the school. The original families often recall the cold, rainy day when they gathered to clear the new property of rocks in order to save on the expense of hiring a commercial contractor. That workday forever embedded the ministry of ECS on the hearts of those who invested so deeply in the Christian school movement as a means of educating their children in a godly environment.

Now, more than 1,300 students have graduated from Emmanuel Christian School. The stones have been replaced by a flourishing ministry, but the memories of God’s guidance and blessing continue to be manifested to this day.