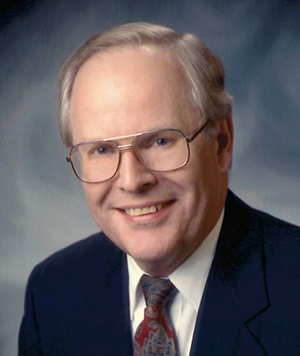 Thompson was Clarks Summit University’s longest-serving president, serving from 1986 to 2000. During his tenure, the school built its seminary facility, launched a graduate program with degrees in education and counseling, began requiring leadership internships, instated its Project Jerusalem church planting ministry, and began offering online education. Enrollment at the university grew; a new residence hall was constructed, and plans to construct another residence hall got under way.

Thompson was raised on a dairy farm in upstate New York. After accepting Christ as his Savior following high school, he initially attended Cornell University, planning for a career in medicine. But, changing career aspirations, he began attending Bob Jones University to train for full-time ministry and graduated in 1957. He later earned a DMin from Trinity International University and was granted an honorary DDiv from Cedarville University.

For nearly 30 years Thompson was a pastor in New York and Pennsylvania, including at Heritage Baptist Church, Clarks Summit, Pennsylvania; Humphrey Baptist Church, Great Valley, New York; and Bethel Baptist Church, Jamestown, New York. He enjoyed serving at churches that were plateaued or declining and helping them become healthy, growing, dynamic ministries. During his pastorates he served as state representative for the Northeast Fellowship and served on the boards of Camp BaYouCa, Baptist Mission of North America, the Association of Baptists for World Evangelism, and Clarks Summit University.

“In a series of strong and effective pastorates, and in a substantive and compelling presidency at our school, [Milo Thompson] served with godly distinction,” says Donald Shirk, pastor of Grace Baptist Church, Batavia, New York, and chairman of Clarks Summit University’s board of trustees. “He was quiet and unassuming, yet a lion in velvet who compelled both church members and church leaders to emulate his example of loving and serving Christ. I am grateful to have sat under his instruction and to have had him challenge the church I pastor multiple times. This sentiment is echoed by many.”

Following his presidency, Thompson founded ChristWay Ministries, a consultation ministry focused on church growth, and served as its president. Through ChristWay Ministries he frequently spoke at churches, conferences, seminars, and retreats. When he spoke at one church’s 135th anniversary celebration in 2006, the pastor, Roy Garthwaite, described Thompson as a man of influence. “Although he would not look at himself this way,” Garthwaite said, “Thompson has been described as a ‘leader of leaders’ among his peers throughout his life and ministry career. Wherever Dr. Thompson goes he has been a catalyst for fresh thinking, leading others to rethink the way we’ve always done it.”

Thompson was preceded in death by his first wife, Beverly, on March 31, 2010.

Posted in Ministry Highlights, With the Lord on April 4, 2017.

Previous post A Video Invitation to You from Dockside!