Cold Water and a Parade Float

New Life Baptist Church participated in a local Founder's Day Parade to not only promote the church's VBS but also to serve the spectators. 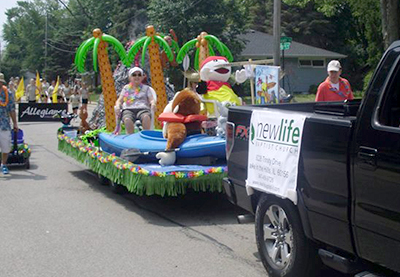 LAKE IN THE HILLS, Ill.—New Life Baptist Church participated in a local Founder’s Day Parade to not only promote the church’s VBS but also to serve the spectators.

Patty Douglas says, “The idea of participating in the annual Algonquin Founder’s Day Parade came about as I was driving through town, just immediately before the parade started. It was the end of July in 2012. People were on the side of the road waiting for the parade to start, and melting in the process. It was a very hot day! It came to me how they could really use some cold water.”

Then she remembered Jesus’ words in Matthew 10:42 about giving a drink to a thirsty person: “And whoever gives one of these little ones only a cup of cold water in the name of a disciple, assuredly, I say to you, he shall by no means lose his reward.”

A year later, New Life Baptist Church held a 2014 planning meeting. Patty shared the idea of participating in the parade and giving out bottles of cold water to spectators. The parade coincided with the church’s Vacation Bible School, occurring the Saturday before VBS. So New Life Baptist decided to participate in the parade by promoting Vacation Bible School and handing out water.

When the VBS decorating team met in late June, Patty brought the Director’s Resource Book for the Arrow Island: Choosing God’s Way program the church would use, published by Regular Baptist Press. The front of the book featured the image of a mountain.

“Before you knew it,” Patty says, “we’d brainstormed our way into building a float resembling an island with a smoke-billowing volcano, sandy shore (tan carpeting), a gorilla, a kayak, palm trees, and more! Everyone left the meeting very excited, with individual assignments all set. Our goal was to meet one week before the parade and assemble the float. With a week’s lead time, we could change anything we didn’t like without being rushed.”

On the day of the parade, New Life Baptist had four wagons and eight bins of iced water—560 bottles, all wrapped with the church logo, address, and service times. Volunteers pulled the wagons, handed out the water, and distributed 1,200 flyers promoting VBS, and seniors who couldn’t walk the route rode along and threw out over 50 pounds of candy to children along the way.

“That wasn’t the end of our efforts though. When the parade was over, the float was taken to church. All the decorations were uninstalled from the float and moved into the church for a week of VBS. It was just enough decoration.”

The church’s float ended up earning second place for design.

By participating in the parade, Patty says, “we became more visible to families in the area. Two families came to our VBS in direct response to the flyers. We met other churches in the parade, including one that gave us a waterfall for our VBS. They’d used it in theirs, but hadn’t disposed of it yet. We met a need through cold water to some very hot people. And the fellowship we had was priceless.