In the midst of an increasingly ethnically diverse but under-churched population, Mountain Stream Baptist Church bills itself as “a place to belong; a place to become.” 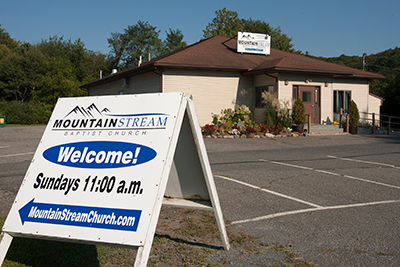 EAST STROUDSBURG, Pa.—Boasting a variety of terrains, from forests and lakes to snow-capped mountains, the Poconos is Pennsylvania’s premier resort destination. Because it offers relatively affordable housing and is situated in Pennsylvania’s northeastern corner, it also serves as a commuter community for New York City and northern New Jersey. This has resulted in an increasingly ethnically diverse and under-churched population.

More than a decade ago, Ken Davis began feeling burdened to see fundamental Baptist churches planted in the Poconos. Davis serves as director of Project Jerusalem, a church-planting ministry of Baptist Bible Seminary. Project Jerusalem is a somewhat unique ministry in that it facilitates the planting of churches and the training of church planters, drawn from the seminary’s student body, simultaneously.

Davis prayed that the Lord would send the ideal man to head up a church plant in the lower Poconos. He found his answer in James Richards, a doctoral student at the seminary. Richards is an experienced pastor, having ministered in Jamaica (his country of origin) for over a decade. He and his wife, Candice, migrated to the United States in 2008, and within a matter of months had joined the church-planting effort. “James has really proven to be an excellent fit for this area,” Davis says.

In 2008, after two years of planning, Mountain Stream Baptist Church launched. At the time, the church rented its worship space from Resica Elementary School. Over 200 guests attended the grand opening.

The congregation has experienced considerable growth ever since, requiring it to relocate twice. After two years in the Resica Elementary auditorium, Mountain Stream began renting out space at Pocono Square Mall. Before long, it became apparent that the burgeoning congregation needed a more permanent solution. In 2011, Mountain Stream Baptist moved into the former Lippy’s Bar in East Stroudsburg.

“We heard that the building was for sale,” Richards recalls. “When we first visited the property, it looked like whoever had owned the bar had just closed up one evening and never came back. There was oil in the fryer and bottles of liquor everywhere.” For an entire month after signing a lease on the building, members of the congregation graciously volunteered their time to repaint and redecorate the interior. The first worship service in the new location was held on Sept. 1, 2013. Two years later, the church purchased the building.

Mountain Stream Baptist in an intentionally multiethnic congregation. “The church pretty well reflects the diversity of this area,” Davis says. Represented in the congregation are people groups originating from Trinidad, Guyana, Barbados, St. Vincent, the Philippines, Brazil, and Peru, among others. “It has been very exciting to see the mix of people that God has brought into our church,” Richards says.

While the church has experienced steady numerical growth, it has also launched quite a few of its own members into the mission field. “A couple of our folk have gone to Brazil, others to the Dominican Republic,” Richards recounts. “We have someone heading out right now to plant a new church in Maryland.” This impulse toward missions work is consistent with Richards’ desire that the church not become too introspective. “When a church is first starting it tends to be very outward-focused because it’s an existential issue—it needs to reach people to survive!” he explains. “But sometimes after a while it can become very inward-focused, and we’re trying to make sure we don’t fall into that. We want to keep our eyes on reaching people for Jesus and helping them to mature in Him.”

Mountain Stream Baptist Church bills itself as “a place to belong; a place to become.” Richards elaborates, “No matter who you are or where you come from, we want you to feel at home here and to know that we care about you and we love you. But also we want to encourage you to pursue what God wants you to become.” He sees this mission encapsulated in the words of Colossians 1:28, which the congregation has adopted as a key verse: “Him [Christ] we proclaim, warning everyone and teaching everyone with all wisdom, that we may present everyone mature in Christ” (ESV).