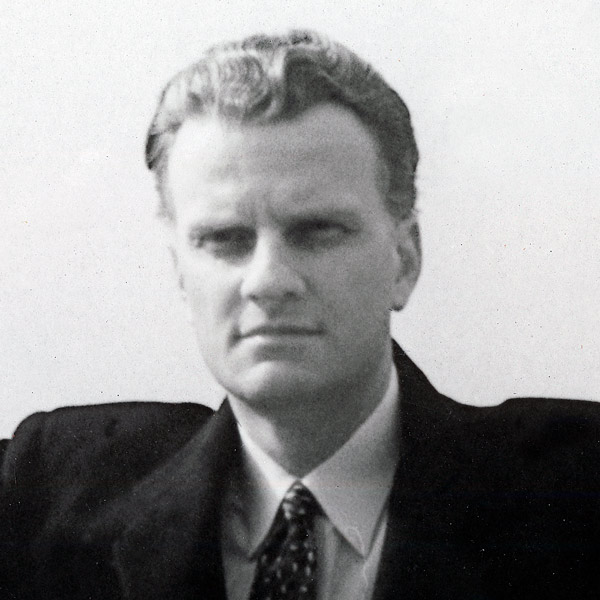 William Franklin Graham Jr., the Baptist evangelist who preached to more than 200 million people and became one of the most notable figures of the 20th century, died on Feb. 21 in Montreat, North Carolina.

Known the world over as Billy, he spent his last years living in the same Black Mountains cabin where he had moved in 1956. At the height of his career he had traveled to 185 countries with a simple gospel message that inevitably began with “The Bible says,” a nod to his theological training and fundamentalist roots.

He was born on Nov. 7, 1918, to William and Morrow Graham, who owned a Charlotte, North Carolina, dairy farm. Billy Graham converted to Christianity during a 1934 revival meeting with evangelist Mordecai Ham. During the altar call a pianist played “Just as I Am, without One Plea,” a gospel hymn that Graham would use at the conclusion of his own sermons for the next 60 years.

After high school graduation, Graham traveled to Cleveland, Tennessee, to enroll in Bob Jones University. His education there lasted only a semester but provided him with important introductions to the leaders who would support his early ministry. Transferring to Florida Bible Institute (now Trinity College), he earned a diploma in 1939. At Florida Bible Institute he met Southern Baptist pastors who strongly influenced his theological ideas. When biographer William Martin interviewed Graham late in life, he still described himself as a premillennial dispensationalist.

Graham was baptized three times—once as a Presbyterian infant, then later immersed as an adult believer by John Minder, the Florida Bible Institute dean. The third and final baptism was performed by Cecil Underwood, pastor of Peniel Baptist Church, East Palatka, Florida, mostly to satisfy the requirements of local Southern Baptist pastors who were sponsoring Graham’s first revival meetings. In 1939 he was ordained by the St. Johns River Baptist Association of northern Florida.

Moving north, he enrolled in Wheaton College, earning a degree in anthropology, and preached at many Midwestern churches and youth rallies. He married Wheaton classmate Ruth Bell on Aug. 13, 1943, followed by a short stint as pastor of Western Springs Baptist Church (now The Village Church) in Western Springs, Illinois. After preaching at several Youth for Christ events, he left the pastorate to become the organization’s first full-time evangelist.

When W. B. Riley recruited Graham as president of Northwestern Bible Schools in 1947, Bob Jones University responded by awarding its former student with a doctorate, the first of many such honorary degrees he accepted. But Graham knew his role as a Christian educator would be short lived. Several of his college administrators and former Youth for Christ associates were forming the now-familiar team that would work together during 50 years of evangelistic crusades.

“Paul recognized the reality of differences among believers in the work of the proclamation of the gospel, but was able to rejoice when Christ was preached,” says John Greening, national representative of the GARBC, referring to Philippians 1. “It is in that same spirit that I acknowledge the vast scope of gospel preaching that was carried on by Billy Graham.” Greening continues:

I recall traveling to Madison Square Garden as a boy to attend a Billy Graham crusade. My dad, though not participating as a sponsoring church, did long for people to be exposed to the gospel. I heard a powerful message and saw scores of people walk to the front at the invitation to express faith in Christ. That experience made a deep impression on me. It stirred the longings of my heart to influence people by making Christ known.

Billy Graham did what Paul spoke about. He magnified Christ by proclaiming the message of salvation. May the longings of our hearts continue to be stirred to that end.

Billy Graham rose to national prominence during his 1947 Los Angeles crusade. The tall, slender young man with wavy blond hair looked like a movie star and sounded like a radio announcer. Speaking with a rapid-fire cadence, he grabbed the listener’s attention with illustrations from current news events. Every sermon seemed to end the same way, with Graham offering each listener peace with God: “We must trust Jesus Christ as Lord and Savior and receive Him by personal invitation.”

William Randolph Hearst visited one night and then issued his famous “Puff Graham” telegram to a nationwide network of newspapers, perhaps hoping that Graham would influence conservative politics. Graham was famous and well on his way to becoming a cultural icon. With the help of song leader Cliff Barrows, Graham furthered his message by learning to harness modern media: radio, television, movies, magazines. Suddenly Graham was everywhere—he became America’s pastor.

The aftermath of the Los Angeles crusade was marked by an uneasy truce between Graham’s fundamentalist friends and a developing group of “new evangelicals.” For a time, Bob Jones, John R. Rice, Jack Wyrtzen, and many GARBC pastors actively supported the Youth for Christ events and citywide crusades.

Graham continued to embrace the same theological ideas that defined orthodox Christianity: the inspiration and authority of Scripture, the virgin birth of Christ, the atonement of Christ’s death on the cross, and Christ’s bodily resurrection. These core ideas supported Graham’s simple gospel message of salvation by the grace of God through personal faith in the Lord Jesus Christ.

Graham used his populist influence to address the long-standing racial bias that conservative Christian leaders often ignored. Where previous revivalists had followed local prejudice in tolerating separate seating for blacks, Graham insisted on fully integrated events, and he modeled that concept by expanding the cultural diversity of his own staff. Graham understood racial integration as a theological imperative, telling a Mississippi crusade audience that “the ground at the foot of the cross is level, and it touches my heart when I see whites standing shoulder to shoulder with blacks at the cross.”

As Graham began to cast a wider net in the religious world, the spirit of evangelical unity fragmented. During preparations for the 1957 New York crusade, he solicited the support of liberal theologians and Roman Catholics, religious leaders who did not necessarily agree with Graham’s core theological ideas. Whatever affection and affinity the fundamentalists may have felt for Graham and his ministry, the breech began a long dispute in evangelical circles, a sad moment from which neither side fully recovered. Called cooperative evangelism by its advocates and ecumenical evangelism by its critics, Graham’s idea remained divisive, despite his continued support.

“I would like to make myself quite clear,” Graham said of the New York controversy. “I intend to go anywhere, sponsored by anybody, to preach the Gospel of Christ, if there are no strings attached to my message.”

The high point of his ecumenical ideal was the 1974 International Congress on World Evangelization in Lausanne, Switzerland, where 2,700 participants from 150 nations affirmed a covenant that advocated widespread cooperation in evangelistic efforts.

‘The Last of a Kind’

Shortly after the news of Graham’s passing broke, dignitaries and common folk alike, the world over, began eulogizing him. “The GREAT Billy Graham is dead,” President Trump tweeted. “There was nobody like him! He will be missed by Christians and all religions. A very special man.”

Vice President Pence released a statement reflecting on the significance of Graham’s life and work: “Billy Graham’s ministry for the gospel of Jesus Christ and his matchless voice changed the lives of millions. We mourn his passing but I know with absolute certainty that today he heard those words, ‘Well done, good and faithful servant.’”

“An epic era of evangelical history has come to an end,” wrote Al Mohler, president of the Southern Baptist Theological Seminary. “Billy Graham was not only a titanic figure in evangelicalism, but in world history and perhaps represents the last of a kind.” Mohler went on to praise Graham’s consistently high moral character: “Billy Graham also has to go down in history as a man who protected the moral integrity of his ministry from the beginning to the end. A man against whom there was never any hint of moral scandal. And thus, he needs to be recognized for having finished the race and having run a course in a manner that should serve as an inspiration to us all.”

Despite the accolades that marked his final years of ministry, Billy Graham never wanted to be remembered by numbers and statistics. “The real story of the crusades is not in the great choirs, the thousands in attendance, nor the hundreds of inquirers who are counseled,” Graham said in 1973, soon after 1.1 million people jammed Yoido Plaza for a rally in Seoul, South Korea. “The real story is in the changes that have taken place in the hearts and lives of people.”