First Baptist Church ordained Zachary Patke, who has served as the assistant to the pastor since April 2015. 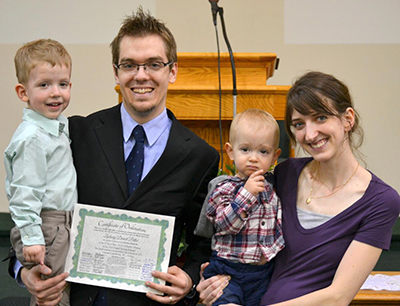 MARSHALL, Minn.—First Baptist Church ordained Zachary Patke, who has served as the assistant to the pastor since April 2015. Patke “has demonstrated a willingness to serve, and shows promise in handling the Scriptures with soundness and clarity,” says Pastor Greg Linscott. The ordination was followed by the congregation’s official recognition of Patke as assistant pastor.

Twenty-one messengers from 14 congregations comprised the ordination council, which convened April 22. The council thoroughly examined his suitability and call to gospel ministry, reviewing both his personal character and doctrinal competency. The council’s recommendation to the Marshall congregation was that he be ordained to the ministry without reservation, which First Baptist did unanimously during the ordination service on Sunday, April 24. A reception followed, honoring Pastor Zac and Hannah Patke as they continue down the path of service prepared for them.