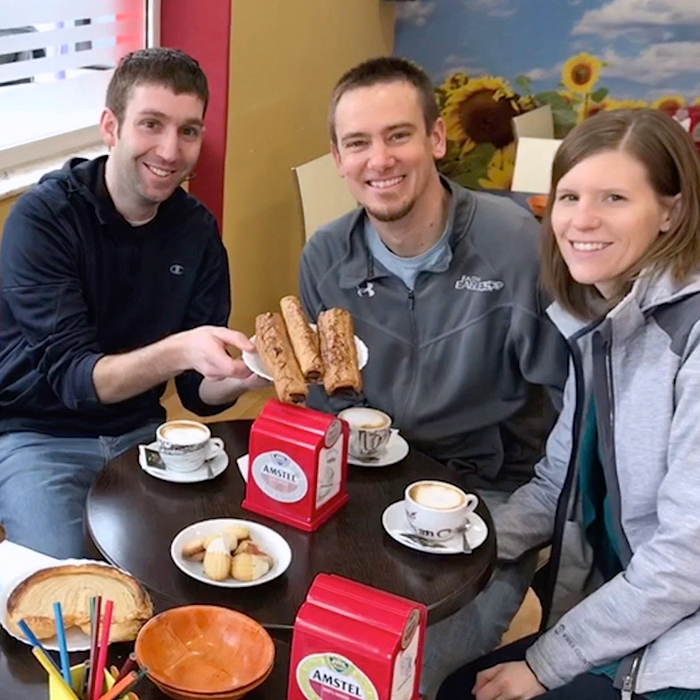 ANKENY, Iowa—A church that cares for its missionaries can make a difference—not only around the world, but in the lives of the missionaries. Ankeny Baptist Church sent church leadership and members to Ponferrada, Spain, March 9–16. Assistant Pastor Brad and Jenny Fincham and their friend Ben Grotzke traveled to visit Seth and Crystal Grotzke, Ben’s brother and sister-in-law, who are missionaries to Spain with Baptist Mid-Missions.

Seth and Crystal have a diligent relational ministry to the Spanish people. Brad observes, “They were constantly having people into their home, setting up one-on-one Bible studies, gathering their coworkers to strategize and pray, and getting out into the city to continue to build and begin relationships.” He adds, “Everywhere we went we came across people who would greet them with smiles.”

This was no small feat, as it can be difficult for outsiders to minister in the Spanish culture. The Grotzkes’ Spanish intern, Santiago, shared that people in Spain can be closed to anyone who is even slightly different than them. Many people assume that the Grotzkes and their coworkers are trying to scam people out of money. However, “the many relationships that have been and are being developed is a testimony to God’s grace and the hard work that is being done there,” says Brad.

observing the Grotzkes’ ministry in the beautiful setting of Ponferrada, which created an atmosphere of worship and praise to God. Brad describes the surrounding mountainous terrain, the budding plants and trees, the colorful and historic buildings, and the precious people the Grotzkes and their team are reaching with the gospel.

The Finchams and Ben Grotzke finished the trip feeling encouraged. “Our desire was to simply come and be alongside of them in their daily ministry and to be an encouragement to them,” says Brad, “and yet we were the ones who ended up being the recipients of encouragement and blessing.”