The Ohio Association of Regular Baptist Churches’ Bike for Youth provides college scholarship money for a young person headed toward ministry. “It pays to invest for eternity!” says the OARBC. 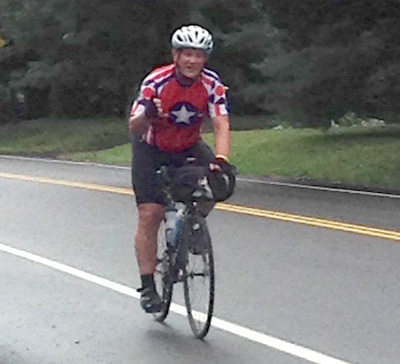 INDEPENDENCE, Ohio—Each September since 2009, cyclists have ridden trails to raise money for the Ohio Association of Regular Baptist Churches’ Bike for Youth. College scholarships are then awarded to young people heading for some type of ministry. The OARBC invites its churches to pray for the scholarship recipients and think of ways to encourage their own young people. Before the event, everyone is invited either to ride or to support a rider and to encourage a young person headed for ministry to apply for that year’s scholarship. “It pays to invest for eternity!” says the OARBC.

Whether cyclists ride on trails near their home or on one of the trails designated by the OARBC, everyone rides on the same day. This year it was Sept. 6. There’s never a guarantee of good weather on the day of the ride, as cyclist Wynn Gerber reports.

“I wanted to let you all know that I was able to complete the 100-mile bike ride despite some wet weather. The scenery revolved around swollen creek beds, flooded yard/drainage ditches, and small frogs lying along the side of the road (most on their backs and I don’t think they were sleeping). I started my ride at 7 and was dry for the first hour, but basically rode in the rain off and on for the balance of the day,” says the CPA from Independence.

“At my last rest stop and at about 80 miles into the ride, a gentleman walked up to me and said, ‘Nice day for a ride, huh?’ At first I thought, What are you talking about? But then he said, ‘compared to yesterday.’ And he was right.” Gerber says he preferred riding on the 6th rather than in the 90-degree weather of the day before.

Just Google 'epicenter of the coronavirus' right now, and you'll likely see a photo of the hospital in Elmhurst, in the New York City borough ...more

Hello, friend, Welcome to the April edition of Bb Pulse! As we find ourselves unable to gather for church ministries during this particular time, the work ...more

"Doors. That’s what comes to mind when I consider my work and the impact of COVID-19," says Chaplain Sidney ...more