William and Patricia Thornton with the Lord

SANTA CLARITA, Calif.—After being united in marriage for 64 years, William and Patricia Thornton were not long separated in death. William died on April 27 at the age of 90. Sixteen days later, Patricia died at 84 years old. 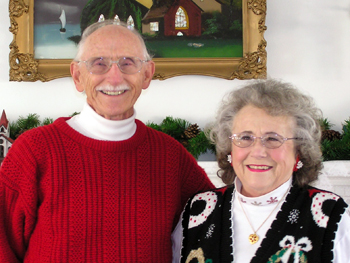 SANTA CLARITA, Calif.—After being united in marriage for 64 years, William and Patricia Thornton were not long separated in death. William died on April 27 at the age of 90. Sixteen days later, Patricia died at 84 years old. Because of their faith in Jesus Christ, both will enjoy eternity in Heaven.

William and Patricia were both born and raised in Dayton, Ohio. Bill served three years with the Army Air Force during World War II, mostly in Burma and India, taking every chance to play his trumpet. The couple married in 1949 as Bill pursued degrees in music from the University of Dayton and Ohio State University.

In 1960 Bill started teaching music at Cedarville College, during which time he earned an EdD from the University of Northern Colorado. Pat also worked at Cedarville in the library and accounting office. The couple continued to be active in church ministry, with Bill serving as music pastor at Washington Heights Baptist Church in Dayton.

The family moved to Santa Clarita in 1970. Bill taught music at Los Angeles Baptist College for three years. They remained active in church ministries, especially with music, until health issues made it impossible to serve.

In 2007 Bill suffered a cerebral hemorrhage and brain aneurysm, eventually leading to vascular dementia. Patricia was diagnosed with colon cancer in January 2013. For both, their faith in Jesus Christ brought comfort and assurance in the midst of these trials.

William and Patricia are survived by a son and two daughters; two grandchildren, including Chips Ross, pastor of Forest Ranch (Calif.) Baptist Church; and six great-grandchildren.

Next post Camping Trip Filled with Play and Fellowship