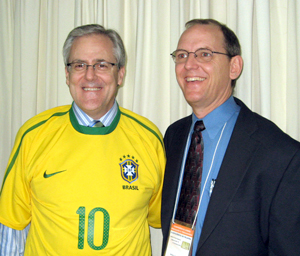 SAO PAULO, Brazil—Bryan Augsburger, pastor of First Baptist Church, Arlington Heights, Ill., traveled to Brazil to speak at a conference sponsored by Regular Baptist Press of Brazil. Chris Hindal also participated in the conference, introducing the International Partnership of Fundamental Baptist Ministries to the pastors of Brazil’s association of churches.

The invitation came through Baptist Mid-Missions missionary Mark Swedberg, director of RBP Brazil, who wanted to organize a conference devoted to expository preaching. Regular Baptist Press of Brazil is an independent publisher started by BMM and ABWE missionaries in connection with the Regular Baptist Association of Brazil. Swedberg is supported by several GARBC churches, including First Baptist.

The morning sessions explored a technique known as lectio-continua form of expository preaching, where the preacher moves through the Bible text, thought unit by thought unit, Augsburger says.

“I tried to illustrate what I would do with these chapters and gave the series the title ‘Wise Ministry’ because it especially deals with the contrast between the wisdom of the world and the wisdom of God and the cross. Mark wanted me to model expository preaching for the evening sessions, which I did by using portions of Scripture that addressed preaching in 2 Timothy 2 and 3.”

Chris Hindal also met with the administrative council of the Regular Baptist Association of Brazil, presenting the history and mission of the International Partnership of Regular Baptist Churches. One pastor summed up their positive response by stating, “It is time for Brazil to think globally.”

Hindal returned from the trip to report that the Brazil council felt that it would be best that each state determine its involvement in the IPFBM.

With the conference meeting just a week before the World Cup, soccer was on the minds of the pastors, many of whom participated in impromptu soccer games after the evening sessions were over.

Augsburger, who once played and coached soccer for Denver Baptist Bible College, responded using many soccer illustrations, at one point comparing the “I am of Paul, I am of Peter” controversy in the Corinthian church to various team loyalties. At the end of the conference, the pastors gave Augsburger an appropriate gift—a genuine Brazil soccer jersey.

“Some of the pastors came 3,000 km away, from the Amazon. It’s neat to see them give this sort of importance and precedence on preaching,” Augsburger says of the pastors who attended.

“Many of them left saying, ‘I really want to give more attention to my preaching.’ ”