The Secret’s in the Steeple 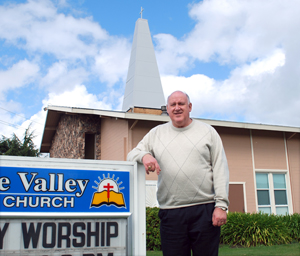 SAN JOSE, Calif.—What does Sunrise Valley Baptist Church in San Jose, Calif., have in common with the National Cathedral in Washington, D.C.? It’s what’s in their steeples.

Both structures house at least one cell phone tower.

Pastor Ron Shaw tells how Sunrise Valley Baptist got theirs: “It started with me. I have Verizon, and about two blocks from my church, my bars would go down, where basically I had no cell service. I knew of a church in our vicinity that had a cell tower in its cross. I called Verizon and said, ‘You know, we’ve got a steeple. Would you consider this?’ And they said no. So I thought it was a dead issue. Then, about a year ago, I got a registered letter from T-Mobile. They were interested in checking out if we had a place for a cell tower and a room they could use.”

The church had an empty room above the pastor’s office, which T-Mobile thought would work great. Pastor Shaw says, “They sent me a contract, and I sent it up to Pacific Justice Institute, and they reviewed it for me. They made some suggestions, and we made some corrections to the contract and sent it back.” The church and T-Mobile then signed a five-year contract.

Early in November 2009 the work began. The company replaced the existing metal-and-wood steeple with a fiberglass steeple at no cost to the church. Pastor Shaw says, “The rest is basically history.”

The National Cathedral reportedly has 12 cell towers. Is that in the works for Sunrise Valley Baptist? Well, no. The church and steeple aren’t that large. But there is room for one more tower . . . so the church is willing to let another cell phone company add one.