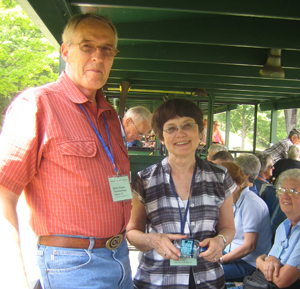 ENDICOTT, N.Y—One hundred New York seniors from 40 churches in the Empire State Fellowship of Regular Baptist Churches enjoyed a five-day trip to “wild and wonderful West Virginia,” as Craig Golden, the ESF state representative calls it. The infamous feud of the Hatfields (West Virginia) and the McCoys (Kentucky) was vividly dramatized in an outdoor theater at Beckley. According to the play, the years-long killing and fighting ended after some key members of the Hatfield family accepted Christ as their Savior. Moving along on their tour, Craig says, “We rode trains high into the mountains using the switchback technique to ascend.” At the opposite extreme, the group rode coal cars deep underground. At Appalachian Bible College in Bradley, W.Va., the school’s president, Dr. Dan Anderson, greeted the group and gave them a tour, provided lunch in the cafeteria, and brought devotions. The group found the campus “beautiful and impressive.” The trip through West Virginia continued with the breathtaking view of the New River Gorge Bridge (the highest in America) and the spectacular mammoth Radio Telescope. Craig says they are “two pretty amazing human achievements.” Craig also says, “The group was really happy with the comedy and music of the American Mountain Theater; the quaint, old, little, historic town of Beverly (established 1792); and the auspicious grandeur of the Graceland Mansion. Our meals ranged all the way from a simple box lunch to eloquent dining in the Graceland Mansion. And of course, our accommodations in the Country Inn and Suites and Hampton Inn were superior, as expected.” He says the 1,300 mile trip was “fun, fast, and folksy,” but adds a serious note: “We all came to have a greater appreciation and respect for the people, not the hillbillies, but the true mountaineers, of West Virginia.”