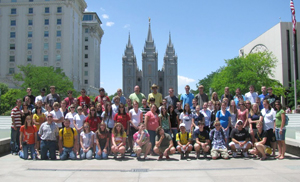 ELYRIA, Ohio—The Hebron Association of Baptist Churches  in Northern Ohio has held their second combined youth missions trip.  After the great success of the first mission trip four years ago in Utah, the team decided to return there for Project Utah 2010, cooperating Baptist Mid Missions. Seven Hebron churches combined to send 73 teens and leaders to minister to and with eight Baptist churches in the Salt Lake City Valley.  The ministry involvement included canvassing, survey work, VBS and backyard Bible clubs, work projects, and Sunday ministry. These projects were experienced though the different dynamics of the various Baptist churches participating in the week, including the variety of rural and urban settings in the Salt Lake Valley. The youth teams rotated between the growing and established churches, to the smaller churches existing in the highly conservative rural LDS communities where 95% of residents are Mormon.  Some groups even were able to do an initial canvass for a brand new church plant with Paul and Laura Fulks.   Paul, a former young person from First Baptist Church in Elyria, was called to this ministry as a result of his mission trip to Salt Lake City. The group prepared for their ministry by completing a healthy list of requirements leading up to the trip, followed by six hours of training in Salt Lake City. Students toured Mormon Square and a 21,000 seat Mormon conference center, and watched informational films produced by the LDS church. Dave Burman, youth pastor at First Baptist, Elyria, Ohio, says the trip saw much fruit in the lives of those who participated. “Countless contacts were developed for the Baptist churches in Salt Lake City, and in communities darkened by a Satanic lie, the gospel message was boldly proclaimed,” Burman says. Participating churches include Camden Baptist Church, Wellington; Calvary Baptist Church, Sandusky; First Baptist Church, Elyria; First Baptist Church, LaGrange; First Baptist Church, Wellington; Grace Baptist Church, Port Clinton; and Grace Baptist Church, Westlake. Thirty churches fellowship with the Hebron Association of Regular Baptist Churches, a local group organized five years prior to the founding of the GARBC in 1932.
Posted in Featured Stories, GARBC News, News on August 25, 2010.