DEARBORN, Mich.—When Dave Doran steps to the platform of the 2013 GARBC Conference, he’s not far from home. He grew up in Dearborn Heights, Mich., just a few miles from the Adoba Hotel and Conference Center in Dearborn. And he starts with a small confession: As a teenager he and a [...] 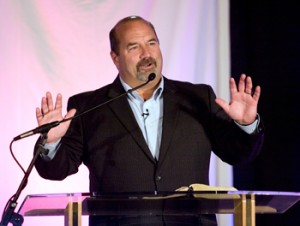 DEARBORN, Mich.—When Dave Doran steps to the platform of the 2013 GARBC Conference, he’s not far from home. He grew up in Dearborn Heights, Mich., just a few miles from the Adoba Hotel and Conference Center in Dearborn. And he starts with a small confession: As a teenager he and a buddy would take the elevator to top floor of this building, then sneak onto the roof to watch the Fourth of July fireworks. “It seems a little odd to be standing here preaching,” he says. His two sermons on steadfast ministry have been informed by his own lifetime of experiences ministering in the Detroit area. During an interview with the Baptist Bulletin, he spoke of the ups and downs of ministry, honest enough to say, “I’ve had more times of discouragement with myself than with my church!” “I would imagine that most of us long to see the work of God advance and the Word go forth. Usually, unless God brings times of renewal and awakening, we don’t see renewal as often as we’d like to see it,” he says. Doran cites well-known preachers such as Charles H. Spurgeon, usually remembered for his vibrant ministry, who freely admitted to difficult times where “success” seemed fleeting. “Realistically he acknowledged that there were periods of greater surges forward—and times of great discouragement,” Doran says of Spurgeon. “He would see the work advance, but not with the speed he had seen in earlier years.” Doran is pastor of Inter-City Baptist Church, so named because of the merger of First Baptist Church of Melvindale, Mich., and First Baptist Church of Allen Park, accomplished when founding pastor William R. Rice moved here in 1949. He would minister for 40 years before retirement, developing a parcel of farmland into a church, Christian school, seminary, book store, and Christian retirement center. The church grew with the same post-war boom that drove the expanding Detroit economy, right up until the 1980s when recession decimated the local auto industry. “Between 1970 and 1990 the population here dropped significantly. School-age population dropped by 50 percent,” says Doran, who grew up at Inter-City and was saved under Rice’s ministry. Graduating from the high school and seminary that Rice founded, Doran served as the church’s youth pastor (1983–1985). By the time he succeeded Rice as pastor in 1989, Detroit’s downriver region was significantly different. “A family that the church reached in the 1960s was down to empty nesters by the time I became pastor,” he says of his early years at Inter-City. But this demographic transition helped him think more carefully about the peril of pursuing typical measures of success. “A man and a church can be faithful to the Word of God but minister in a place that demographically has shrunk,” Doran says. “If our encouragement in ministry is all based on visible results, we’ll be much more susceptible to losing heart. At the end of the day if the core of our ministry comes from our visible success, I think we are susceptible to discouragement and dangerous shifts in our ministry, striving for visible results.” Detriot’s demographic shift was occurring at the exact time that noted evangelical leaders were suggesting flawed solutions for church growth. As Doran continued his education, he made this problem the topic of his DMin project at Trinity Evangelical Divinity School. Later he wrote two influential articles for the Detroit Baptist Seminary Journal: “Market Driven Ministry: Blessing or Curse?—Part One” and “Market Driven Ministry: Blessing or Curse?—Part Two.” The results of his study encouraged him—it was possible to develop Bible-based answers to the ups and downs of ministry. His sermons on steadfast ministry this week are motivated by the exhortation of 2 Corinthians 14. For Doran, “we do not lose heart” (v. 1) is the essence of steadfast ministry, one that is motivated by a proper understanding of the “gospel of the glory of Christ” (v. 4) and its role in the life of the church. A fuller understanding of this glory leads to the grace that will “abound to the glory of God.” (Interestingly, Doran used this as the title of the blog he writes, Glory & Grace.) Somewhere in all of this, the old Dave Doran was disappearing. On Thursday night he reports a major life lesson, explaining how God could use the kid who used to watch fireworks from the hotel roof. “God is not interested in us impressing people. He wants to impress people, so He puts this treasure in earthen vessels.” This topic had came up earlier in the day, when Ken Floyd hosted a speakers’ panel with Dave Doran and three others. Asking for “a two minute sketch of your spiritual journey,” Floyd heard responses from George Coons (“I felt like I’d never amount to anything”), Mike Augsburger ( “a smart-aleck pastor’s kid”) and John Greening (“I wasn’t a terribly profound high schooler”). Doran used the speaker’s panel to suggest that leaders sometimes approach renewal from the wrong perspective. “We’ve got outer man decay, and we seek to resolve that by looking for outer man renewal,” he said, pointing out the limitations of that approach. At the close of his evening sermon he brought the subject again, suggesting that a day off or a vacation might not bring true renewal. Pleasurable activities “may refresh you physically but it won’t guarantee an inner man renewal,” he says. And another danger lurks. Instead of feeding our inner person on the promises of God, Doran says that some leaders “end up getting dragged into the fleeting promise of sin.” Responding to discouragement the wrong way,  then end up pursuing sinful or frivolous forms of escape. Doran leaves the conference guests with a different solution, a reassurance that the ups and downs of ministry are important: “God plans the tough times to magnify His power.”

During the Thursday evening service, John Greening presented the final two GARBC Service Awards for 2013. Read “GARBC Honors Lifetime Service” for profiles on Ann and Maynard Belt, Virginia and Bob Cowley, Sandi and Tom Goodrich, and Earl and Eleanor Swiggart. During the International Ministries report, Chris Hindal asked churches to consider assisting one of our international partners with a $800 gift to help with travel expenses to the IPFBM Conference in Bangkok this fall. Many of our partnering pastors cannot afford the travel expense. Hindal also showed a new video, “Gospel Literature Services Celebrates 40 Years.”
Posted in GARBC News, News on July 2, 2013.